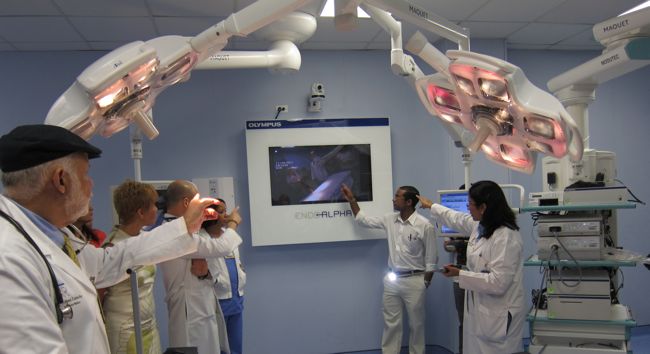 As always, the motivation behind the “Café de la Leche” was to collect milk for the more than 200 babies cared for at the Hogar del Niño in La Romana, but on this occasion it was also an opportunity to discover the new “Centro Médico” hospital and attendees were led on a tour by Dr José Lopez, the Health Vice President of Central Romana and Director of the Centro Médico.

Equipped with the most advanced technology, this impressive new facility, boasts 3 floors of patient care with a comprehensive pediatric ward on the first level, spacious well-equipped rooms on the second and finally an impressive surgical unit and neonatal ward on the 3rd floor.

The new technology which will be used to treat future patients Central Romana’s new “Centro Médico” was undoubtedly the star attraction of the tour. The surgical unit, not only has a general surgical ward, but also 2 alternative surgical theaters for more complex procedure, which boast state-of-the-art equipment. Most impressive of all is the “Keyhole” surgery equipment and operating theater, this equipment allows surgeons to perform using only small incisions with images being relayed to screen with the help of Olympus HD Cameras. This technology also allows doctors to take images of inside the patient which can be recorded for records or used to get a second opinion.

Images taken from inside the patient are displayed in real-time

“This means that we can get a second opinion during the procedure in real time from a another surgeon who may have more experience” explained Dr. Elizabeth Leon Gonzalez, who is a general surgery specialist.

The Neonatal unit of the new “Centro Médico”

The “Centro Médico” will be officially inaugurated and opened at the end of November and thanks to Central Romana’s continuing commitment to the La Romana community will soon be offering en excellent and much needed medical service to the Casa de Campo La Romana community.

The following are photos taken during our tour of the Centro Médico facility in Central Romana La Romana: