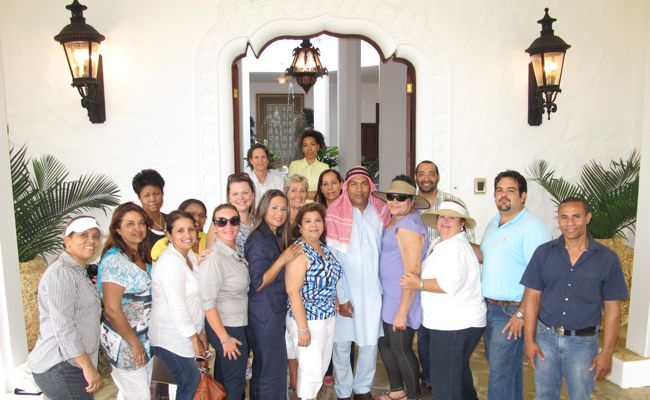 On Wednesday the 2nd of May 2012, “Costasur Dominicana” hosted a “Broker’s Caravan” for it’s many real estate brokers – a tour around Casa de Campo, visiting a number of Casa de Campo’s most impressive villas, (all currently for sale with Costasur), ending with a special lunch at “Arabic Palace”, Barranca Este #25.

And so following the tour, the real estate brokers of Costasur arrived at Barrance Este #25, where they were welcomed by a butler dressed in Arabic style clothes and where following a fascinating tour of the property were treated to a delicious “arabic” style lunch, prepared by one of La Romana’s most popular restaurants – Shish Kebab!

Barranca Este #25, built by Mary Rogers de Vicini in the 1989, is a stunning and sprawling Casa de Campo estate which occupies 7,526m2 of land and boasts waterfalls, stained glass windows, enormous tropical gardens with swimming pool and wrap around terraces on both the first and second floors, as well as incredible interior design.

Mary Rogers de Vicini and her palacial Casa de Campo villa,(as well as her 7 dogs and numerous other pets), were featured in Selecta Magazine  in 1989, the sister publication to CasaLife, the exclusive Casa de Campo Resort and Resident Magazine, and the following brief history and story of this magnificent villa and the elegant Mary Rogers has been elaborated with the help of this article.

Mary Rogers’ Moroccan-inspired Casa de Campo villa was designed by the famous Dominican architect Eduardo Lara Bermudez, who having studied in both India and Japan, blended his own exotic and oriental design concepts with Mary’s own ideas, which she drew from her extensive travels. For the interior design of the villa, Mary chose Patricia Reid Cabral, who worked with Mary to bring every room to life exactly as she wanted it, with many of the tables and mirrors, designed by Patricia’s father, Billy Reid Cabral, the renowned Dominican architect and artist.

Although Mary Rogers de Vicini, the daughter of Albert Williams Rogers, who arrived in Santo Domingo after World War 1 and América Antonia de Moya Alonso, is sadly no longer with us, many members of the Casa de Campo community remember her fondly – most notably for her annual “pets party” which she hosted for her Casa de Campo friends and their pets, no doubt a fun yet somewhat chaotic occasion!