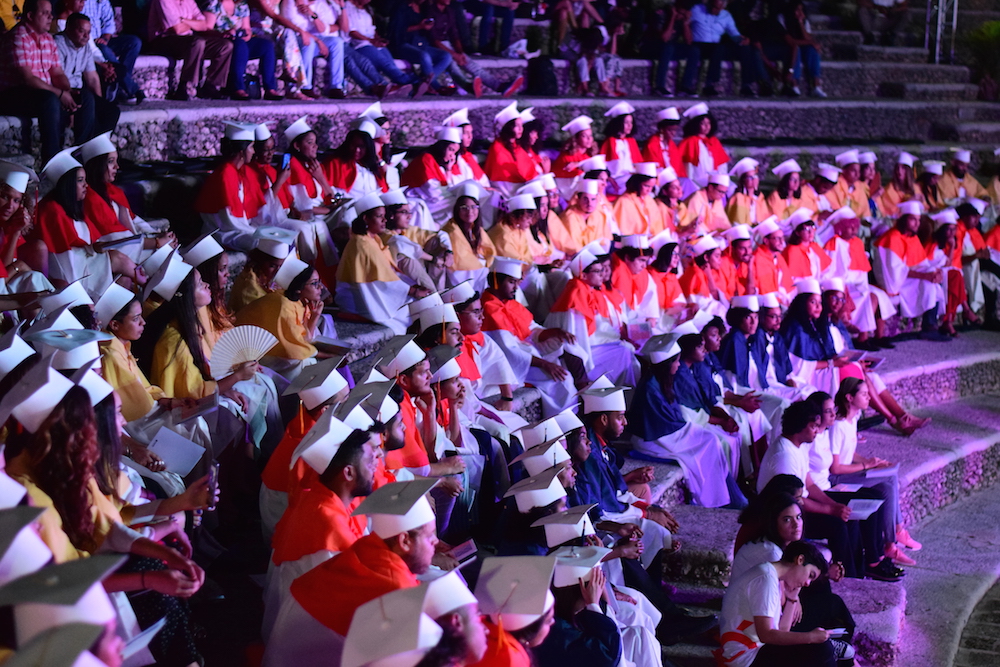 The Chavón School of Art and Design school year came to a successful close last week with a beautiful graduation ceremony at the amphitheater, as well as a magnificent exhibit of the students work in the Altos de Chavon art gallery. On Friday, May 17th the graduates and their families were blessed with a beautiful evening where they were officially proclaimed Chavoneros after two years of hard work.

Around 6:30 p.m., the ceremony began with the students marching to what has become the traditional opening song, “Libertad” sung by Nana Mouskouri. Each student wore a different color representing the school of study; red for fashion design, yellow for visual communication, dark blue for fine arts and orange for film. The students walked down one of the three center stairs at the amphitheater to finally settle at the first few rows where they were met by the school’s administration and faculty members who have witnessed their evolution during these past two years.

Sanil Mercedes, the master of ceremonies, who is also assistant Rector and Director of The Art Gallery, welcomed the students, faculty, families, and guests as well as introduced special guests: Alina Rancier, a Chavón graduate who currently is a filmmaker, video and motion graphics artist based in NYC with over 14 years of experience working in design and post-production for commercials, short films, photoshoots, music videos, and social media content creation; Juan Basanta, one of the first Dominican professional graduated of Cinematography in the International School of Film and TV of San Antonio de los Baños in Cuba, a prestigious school directed, at the time, by author Gabriel García Márquez; and Marcel Beltran, Director and independent editor. His films have been shown in Canada, France, Germany, Spain, the United States, Argentina, Brazil, and South Korea, among other countries.

Rector Stephen D. Kaplan also addressed the students wishing them all the best for their future in the world of art and design. Later that evening he along with Victoria Pereyra, Academic Coordinator, presented the students with their diplomas.

For the students, the past two years have been grueling, exciting, frustrating, information filled, skill building, celebratory, tense, joyous, and rewarding. Over these years they’ve learned how to live on their own, how to work in teams and independently, how to push their abilities to the breaking point, how to reach much farther than their arm’s length, and find their own voice. They now head out into the world to make a name for themselves and to continue to elevate the already excellent reputation of Chavón School of Design, which has been graduating students from its two-year associate-degree program, affiliated with New York City’s prestigious Parsons “The New School For Design” since 1983.

After the ceremony which concluded with the song, “Rumba Azul” by Caetano Veloso, the proud students made their way, diploma in hand, with their guests to the main Gallery where they all happily posed for pictures and were congratulated by all in attendance.

Congratulations Chavoneros!! We look forward to following your careers and hearing your success stories as you go out into the world. Go forth and conquer!

The following photos were taken by Diego Alcántara, Christian Nin and William Tuesca on Friday, May 17th at the 35th graduation of the Altos de Chavón School of Design Class of 2019: