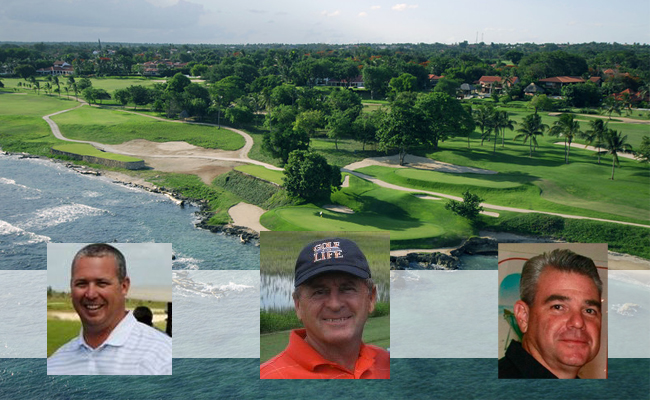 Casa de Campo, newly crowned, the “World’s Leading Golf Resort”, boasts, without a doubt, world class golfing facilities; with 4 Pete Dye designed golf courses as well as the newly opened 9 holes, the “Dye Fore Lakes.” But it is the Casa de Campo Golf Department, who work behind the scenes to ensure Casa de Campo offers an exceptional golfing experience and thus making it worthy of being named the “World’s leading Golf Resort.”

Gilles Gagnon has been working for the Casa de Campo golf department for more than 30 years, arriving when the resort had just one golf course; “The Teeth of the Dog”, which just celebrated it’s 40th anniversary and which is Gilles personal favorite golf course to play. In his role as Director of Golf for the Casa de Campo Golf Department, Gilles is in charge of the entire golf operation. Over the years, Gilles has overseen the opening of 3 new Pete Dye designed golf courses, as well as successfully creating numerous golf tournaments and events, such as the Casa de Campo Open, which last year celebrated it’s 30th anniversary and one of the best golf events in the Caribbean; the Caribbean Classic. Casa de Campo and her famous golf courses have become much more than just a job for Gilles Gagnon, for this golfing fanatic, Casa de Campo golf is his home, his obsession and his passion and one which he is quiet rightly very proud of.

What makes Casa de Campo the “World’s Leading Golf Resort”?
Gilles: Me of course, just kidding. The entire Casa de Campo staff – we all work together to make Casa de Campo the very best it can be; the golf staff, the hotel staff, the cleaning people – everybody. Probably 50% of my staff have been with me since the beginning and they pretty much know what I want and what I am thinking about. I can also say that the workers are better now. For example, I have two young ladies that work with me in the office; Carolina and Liondy, they are bright, dedicated and that makes all the difference. I trust them so it gives me a chance to plan for more events. My two assistants Dave and Raul are also very good at running events and that is key to our success.

A recent addition to the Casa de Campo golf team, Raul Cendoya has fallen in love with Casa de Campo and describes his new job as a “dream come true.” In his role as Casa de Campo golf professional, Raul spends most of his time working on the Dye Fore golf course, a course he describes as “physically demanding” with “phenomenal” views of the Chavón river, whilst the new Dye Fore Lakes is in his opinion “our toughest 9 holes of golf at Casa – hands down.”  An important part of his role in the Casa de Campo golf department is helping to run the many golf tournaments and events which take place every month, he does this successfully by not only managing the logistics, but also by “treating every customer as a VIP” – ensuring everyone enjoys an exceptional golfing experience.

What in you opinion makes Casa de Campo the “World’s Leading Golf Resort”?
Raul: The easy answer is the golf courses but it is so much more than that. I can only speak for myself. I want people to be as happy being here as I am working here. When I first met Gilles he spoke with a certain passion about Casa and that caught my attention.  I understand now, he loves this place, this is his home and my co workers this is their home. We are proud to be the leading Golf Resort and to maintain it you need to take pride on your work. Gilles takes so much pride and he preaches that all the time.

Dave joined the Casa de Campo golf department in April 2010 and has since then become an invaluable member of the team. In his role as Casa de Campo Head Golf Professional, Dave is responsible for the running of tournaments (both those organized by the golf department as well as private events) and the day-to-day operations of the golf department. Thanks to his long career, Dave has extensive and proven experience in all aspects of the golf operation, including instruction, merchandising, organizing tournaments, management and handicapping.

Casa de Campo’s first golf course, Pete Dye’s masterpiece, the Teeth of the Dog, was opened more than 40 years ago in 1971 thus beginning the transformation of Casa de Campo, from rural seaside retreat to a world-class golf destination, otherwise known as the “World’s Leading Golf Resort.” For those of you unfamiliar with Casa de Campo’s top-class golf facilities, here is an overview of what the resort has to offer:

The Teeth of the Dog Golf Course

With 7 holes skirting the Caribbean ocean, the Teeth of the Dog is consistently ranked [by Golf Magazine] as the #1 golf course in the Caribbean and the 47th best golf course in the world. Cited by Pete Dye as one of his best accomplishments in his 50 year career, the Teeth of the Dog was built entirely by hand and with 6,888 yards and a par 72-layout.

Opened just 5 years after the Teeth of the Dog, Casa de Campo’s the Links golf course, was also designed by Pete Dye. This in-land course is thought by some to be reminiscent of traditional British and Scottish golf courses with a moderately hilly track and several lagoons and lakes. This course may not be as thrilling or visually stunning as the Dye Fore or the Teeth of the Dog, but many golfers have been heard to say that The Links is just as challenging as the Teeth of the Dog and with water coming into play on no less than 5 holes it is not surprising.

Located in Altos de Chavón, the original Dye Fore golf course was opened in 2003, an 18 hole golf course with 7 breathtaking holes curving along the cliff, which towers above the Chavón river 300 feet below, however last year (2011), the Dye Fore Lakes was opened adding an additional 9 holes and thus creating a spectacular 27 hole complex. Today Casa de Campo golfers can choose to play the traditional Dye Fore routing or pair either the North or South 9 of the Dye Fore with the Dye Fore lakes for a different and arguably more challenging golfing experience.

Within the Casa de Campo resort there are 3 practice ranges, although only 2 are open to the public, whilst the 3rd belongs to the La Romana Country Club. The principle practice range, which has just been renovated is located near the Casa de Campo hotel at the start of the Teeth of the Dog and Links golf courses. The second practice range, which just opened last year is located in Altos de Chavón, by the Dye Fore 27-hole golfing complex and is a much larger, offering golfers the opportunity to practice hitting the longest drives.