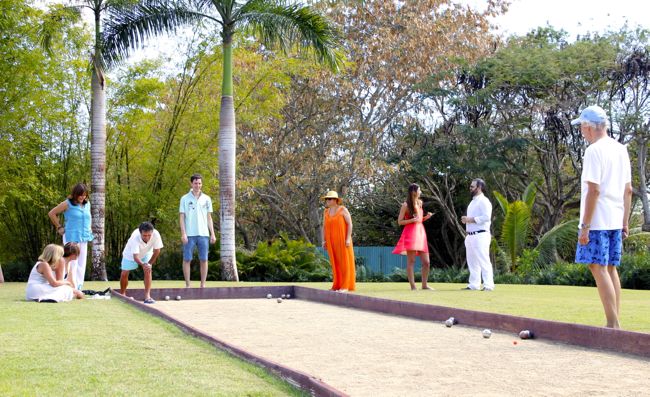 Sometimes there is nothing better than a little bit of competition on a hot sunny afternoon… and that was exactly the case last weekend when Casa de Campo villa owners Monica and Michael Belcourt hosted a Bocce Ball tournament.

“We play all the time in Canada,” Monica explained to Casa de Campo Living, when asked why they decided to host the tournament, which much to our surprise took place on an actual bocce ball ‘court’, built when the Belcourts constructed their villa a few years ago.

With everyone dressed down in bathing suits, shorts and sunhats it was really a refreshing change to get together in such a laid-back atmosphere, a far cry from the usual glamor of all the parties and dinners we usually attended, which of course we love too!

The fun group of 24 were divided up into teams of 2, and the play got underway… that is after an animated discussion on the rules, with both Italians and Canadians present, there was a little disagreement about which rules we should follow. In the end given the nationality of our generous hosts, the Candians won! They did however not win the tournament….

Playing in a sudden death format, the game quickly progressed to quarter finals, semi-finals and then the finals, until Lelli Asch Palomba and Sergio Cossa were crowned the champions and won a bottle of champagne each!

What fun we all had!

Our hosts, Micheal and Monica Belcourt with Bob Avelot

Another game we also played, and one which is very popular among the community, is counting the number of nationalities present. On this occasion we counted a total of 13 different nationalities represented in the group; Canadian, American, Austrian, German, Spanish, Dominican, Italian, Belgian, English, Filipino, Serbian, Russian and French.

Thank you very much to Monica and Micheal Belcourt for hosting such a lovely afternoon in the sunshine!

The following collection of photos were taken at the Casa de Campo villa of Micheal and Monica Belcourt:

P.S For those of you wondering about my unique headwear – it was rather sunny and that was my solution to keeping the sun off of my beautiful “English rose” skin!