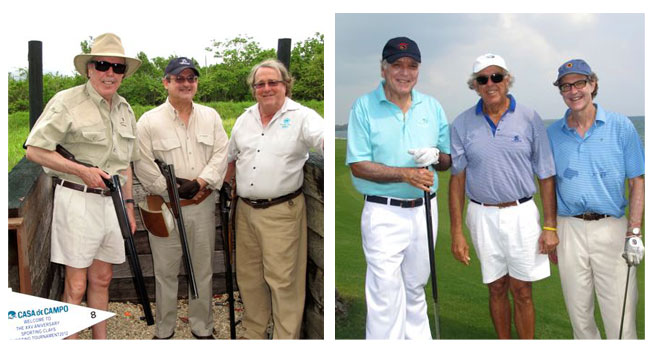 The first Sugar Shooting Tournament took place in 1988, hosted by J.Pepe Fanjul in celebration of the opening of a new and improved Shooting facility; the Casa de Campo Shooting Center, which, originally located near to the Casa de Campo Polo Fields, had just re-opened with a Sporting Clays circuit of more than 200 stations, two pigeon rings, and a skeet and trap facility. 15 years later, following the appointment of new Director of Shooting; Shaun Snell, a new shooting facility at Rancho Peligro for European Style Driven Bird Shooting was opened, allowing the tournament to grown from a 4-day event to a 6-day event. Today, this prestigious occasion incorporates the Live Pigeon Shoot, the Colombaire and the Sporting Clays, as well as the European Style Driven Bird Shoot at Rancho Peligro, all accompanied by various cocktail parties and dinners.

Meanwhile the Sugar Golf Tournament is the Fundación MIR’s original fundraising event, from which Lian Fanjul de Azqueta, Founder and President of the charity got the seed money to open the “Casa de Paz”, which has now become the internationally recognized foundation; the Fundación MIR. “The Sugar” was founded in 1984 by Alfy Fanjul and Don Creamer as a “normal” golf tournament, but when Alfy (Lian’s brother) won in 1990, he donated his winnings to Lian, thus transforming the Sugar golf tournament into a charity event for the Fundación MIR.

As is the tradition, the Sugar Golf Tournament hosted by Alfy Fanjul and played on Casa de Campo’s Teeth of the Dog, Links and Dye Fore, will be accompanied by a series of cocktail parties and dinners – including the welcome cocktail hosted annually by Marina Casa de Campo business, I.B.I Nautica. Also accompanying the Sugar Golf Tournament this year (as every year) is the MIR Bazaar, a 4-day bazaar at the La Romana Country Club, with the sale of jewlery, arts and crafts, home decor items, clothing and much more, the MIR Bazaar will be open from the 4th to the 7th of April.

Last week from Wednesday March 28th through to Saturday March 31st, 2012 the 27th annual Sugar Golf Tournament was celebrated in Casa de Campo with 4 nights of celebratory cocktail parties and dinners, accompanied by 4 days of golf; 2 days of practice rounds and 2 days of  tournament rounds on all 4 of Casa de Campo’s golf courses; the Teeth of the Dog, the Links, the Dye Fore and the La Romana Country Club.

The MIR Bazaar and Ladies Luncheon – the height of fashion!

The MIR Bazaar in aid of the Fundación MIR was open in the La Romana Country Club from Thursday March 28th through to Sunday April the 1st and offered Casa de Campo ladies and visitors a fantastic opportunity to indulge in a little retail therapy – and support a great cause. In celebration of the Bazaar, Lian Fanjul de Azqueta hosted a by-invitation only “ladies luncheon” on Saturday March the 31st, which featuring a fantastic fashion show by Azzurro and was a great success.