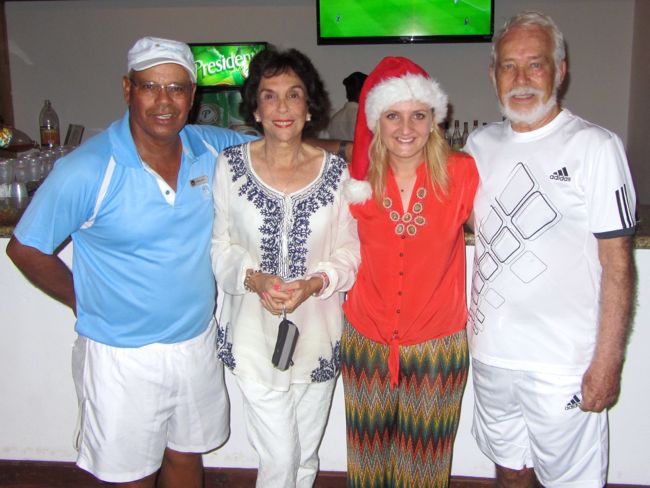 Last Saturday the 13th of December, the Ball Boys Foundation celebrated their annual Christmas party for the more than 50 ball boys of the La Terraza Tennis Club.

The La Terraza Tennis Club, offers 13 immaculately maintained, fast-dry Har-Tru courts, making it the largest tennis complex in the Caribbean. But beyond the top class facilities, it is the service and the professionals of the La Terraza that really makes it shine. And forming an integral part of that team are the ball boys.

“They usually start when they’re ten or eleven. They start as boleros, then they become players, and after players they become junior pro’s; so far we have 8 junior pro’s and 14 players. I don’t think any club throughout the Caribbean has as many pro tennis players. They are taught English, and we require them to attend school.” Emilio Vasquez told Casa de Campo Living, and in fact the Ball Boys Foundation pays for scholarships for the majority.

And so last Saturday the 13th of December, the ball boys, as well as the professional players, were invited to a Christmas celebration by Casa de Campo villa owners, Dolly and Antonio Esteban, such passionate supporters of the tennis and the ball boys, they are known as “Tía Dolly” and “Tío Antonio”. The group were treated to a special Christmas feast given by the Casa de Campo resort which included 2 legs of pork, rice, beans, and delicious deserts, as well as dishes cooked by Dolly herself as well as by Margarita Golbert and Gloria Bonell. To close the celebration the boys were each presented with a box of “gummies” (a type of jelly candy), which they took home to share with their families. In addition all the ball boys, the players and junior pros also received a gift of RD$500 each.

The Ball Boys organization was founded by Enzo Mastrolilli more than 10 years ago, and at the end of the gathering the group said a prayer for their founder, who having been ill for a long time, passed away the following morning on Sunday December 14th. Our thoughts go out to the family of Enzo in this difficult time.

The following collection of photos were taken during the gathering at the La Terraza Tennis Club in Casa de Campo: