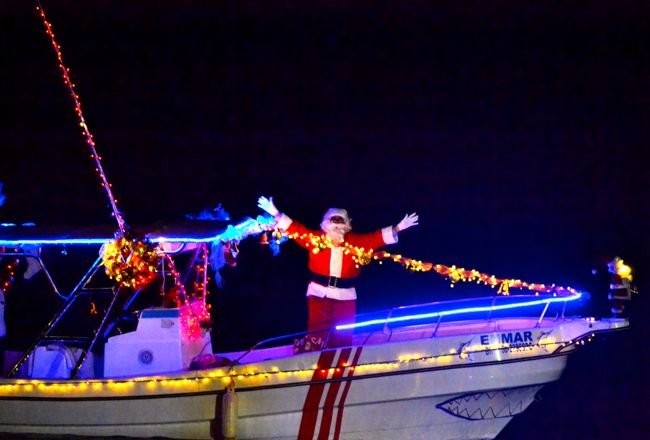 The evening started with a magnificent sunset, as the night sky illuminated in a magical orange glow characteristic for this time of year in Casa de Campo.

Once the sunset on yet another beautiful day in paradise, it was time for the parade to begin… and while this year there was just 3 boats participating in the show, what lacked in quantity, was made up for with enthusiasm!

The second place winner, “ENMAR” paraded in front of the gathered crowd with a stream of lights and very jolly santa waving with all his might as he guided his nautical sleigh around the Victory Plaza.

Meanwhile, “Capitania” who came in 3rd place were as full of life and enthusiasm as always and treated the guests to some candies – thrown into the crowd as they sailed on by.

And finally there was “RIMAR”, who having created an entire nativity scene and completely decked out from bow to stern in glistening lights, certainly deserved to win 1st place, and the RD$75,000 check.

We hope you all had a great time!

The following collection of images were taken by Alejandro Heredia at the annual Christmas Boat Parade at the Marina Casa de Campo: