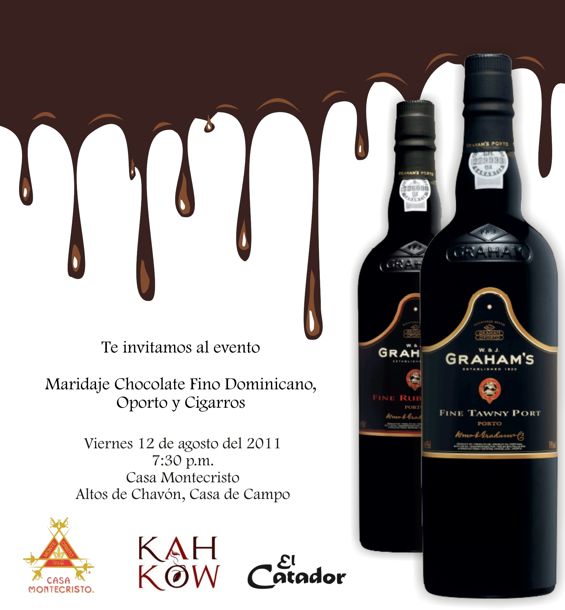 This Friday the 12th of August, the night before the Fundación MIR Family Weekend for Life event (click here for more info), there is a number of events going on in Casa de Campo Dominican Republic, in the Marina Casa de Campo as well as in Altos de Chavón! One such event (which I will be attending) is the ‘Maridaje de Chocolate, Oporto y Cigarros’ (chocolate, port and cigar pairing) at the Casa Montecristo Cigar Store and Lounge in Altos de Chavón.

The event being organized by the Casa Montecristo with the world’s largest hand-rolled cigar factory the Tabacalera de Garcia will no doubt be wonderful – I personally love chocolate and port and although I’m not the biggest fan of cigars I know some people who do, so I am sure I will be very well accompanied!

Also happening this Friday the 12th of August is the debut party for the ‘Notte Pershing’, the new Pershing ’64 yacht, which will be making it’s virgin appearance in the Dominican Republic and will be celebrated with a party at the Casa de Campo Yacht Club with hosts ERH Marine and sponsors Grey Goose Vodka. This event starts at 7pm but will continue until 1am – so you can go and enjoy it after the Maridaje!
To find out more, click here!

The cigars on sale at the Casa Montecristo Cigar Store and Lounge in Altos de Chavón, Casa de Campo are all hand-rolled in the Tabacalera de Garcia, the world’s largest hand-rolled cigar factory, located just 5 minutes outside of Casa de Campo in La Romana.

About the Tabacalera de Garcia

The Tabacalera de Garcia, established in 1971 is the world’s largest hand-rolled cigar factory with a long and varied history, making it an absolute must place to visit – whether you are a cigar lover or a casual aficionado! It has nearly 5,000 employees and produces about 120,000 cigars per day – there is something to be said about old fashion methods!

It is home to the makers of the Finest Dominican Cigars: Montecristo, Romeo y Julieta, H. Upmann, Don Diego, Santa Damiana, VegaFina, and Onyx amongst others – on this tour you will see the proud handwork of the cigar industry’s most experienced craftsmen and women, working on some of the worlds leading cigars.

Lucky for us in Casa de Campo, this fully operational factory and historical gem, is located just outside of Casa de Campo and is open to the public, for tours.

The Cigar Factory Tour is available Mondays to Fridays, between 8am and 4pm and Saturdays between 8am and 12pm, by appointment.
To arrange a tour, contact us on:
Tel: 809-523-2045
Email: [email protected]