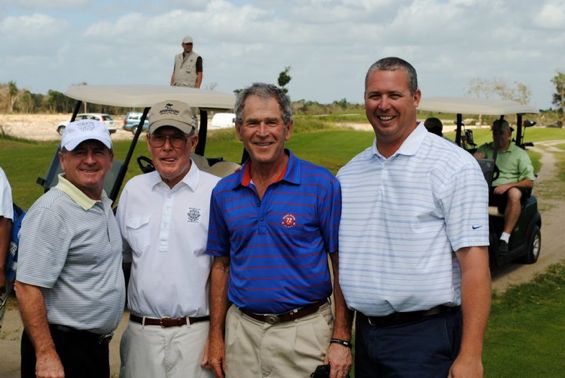 Since his arrival, former President George W Bush has played both the Teeth of the Dog and the Dye Fore golf courses. During his time here Dave Pfsiterer, Casa de Campo’s golf professional (pictured above right) joined Bush for 2 rounds of golf on Casa de Campo’s Dye Fore golf course, a stunning Pete Dye designed course with beautiful water features, a stunning view of the Marina Casa de Campo, as well as dramatic holes skirting the ravine and the Chavón river.

Also lucky enough to play golf with the president was Gilles Gagnon, Casa de Campo’s golf director and Pete Dye himself. As a very special guest, Pete Dye gave the former US president a sneak preview of the new, as yet unnamed, 9 holes at Dye Fore yesterday morning, Tuesday the 22nd of February.

Former President George Bush Senior is a frequent visitors to Casa de Campo, coming every year to play golf, as the guest of the famous Venezuelan businessman and Casa de Campo villa owner, Gustavo Cisnero. This was George W Bush’s first visit to our beautiful Casa de Campo and according to Dave, he loved it! He apparently loved the golf courses and so maybe like his father, Casa de Campo will become one of his favorite vacation spots!