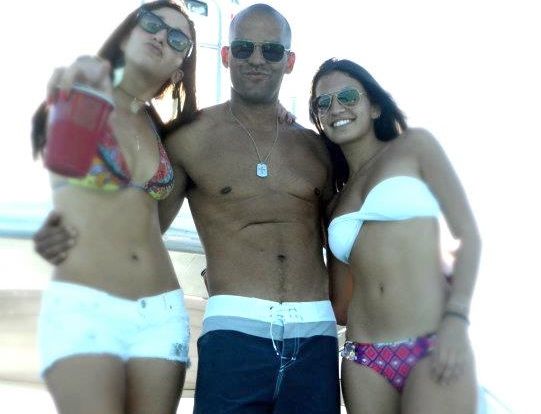 For Casa de Campo celebrity spotters, the last few months were awesome, with numerous celebrities (Vin Diesel, Pitbull, Marc Anthony, DJ Laz and Manolo Cardona) choosing Casa de Campo as the perfect idyllic paradise to vacation with their families. And whilst most were not spotted partying with us during the “La Temporada” party week (Dec 26th – Jan 1st), famous Puerto Rican actor from Prison Break was spotted enjoying the festivities all over Casa de Campo!

Choosing to party it up in true Casa de Campo style, Amaury Nolasco was seen at all the best parties of the season, flanked by a group of beautiful Casa de Campo local ladies (among them the gorgeous Alexandra Varacalli, who contributed the photos), as well as a group of well-known Casa de Campo males, all of whom were only too happy to have the famous Prison Break star join them for the celebrations!

So here goes…… the story of a very handsome Amaury Nolasco partying in Casa de Campo:

There is no better place to warm up for the New Year’s Eve parties than at local beauty (and party) spot Palmilla, which is only reachable by boat, located about 30 minutes outside of the Marina Casa de Campo. And it was here, at Palmilla, that Amaury Nolasco and his Casa de Campo friends spent a chilled out day, enjoying the vacations and warming up for a wild New Year’s Eve in Casa de Campo. It looks like it was a fun day – here are a few more photos:

On Friday the 30th of December 2011, Casa de Campo villa owners, as well as visitors from Santo Domingo and overseas filled the Marina’s restaurants; Limoncello, Pepperoni, Chinois, Mistral and ‘Cafe Juanita’  for dining under the stars and a few chilled out drinks before the Marina Casa de Campo’s usually tranquilo Plaza Portofino was transformed into a huge outdoor nightclub – complete with DJ, satellite bars and several hundred merrymakers, who were all set on having a good time…..

Click here for more PHOTOS of the party at the Marina Casa de Campo!

Amaury Nolasco at the PALMILLASO 2011

Everyone, even celebrities, love the Palmillaso boat party, a truly unique New Year’s Eve party with champagne swilling, boat hoping and all sorts of other celebratory madness – so it’s no surprise that Amaury Nolasco chose to join us for Casa de Campo’s most legendary party!

Once again joined by his Casa de Campo crew and various stunning young Casa de Campo ladies, such as the gorgeous Vanessa McLay (pictured above), Amaury Nolasco ended his wild New Year’s Eve celebrations at Minitas Beach, where, along with thousands of other Casa de Campo villa owners and residents, he who partied until sunrise and beyond!

Many thanks to Alexandra Varacalli for the photos!

Click on the following links for more photos of celebrities in Casa de Campo:

• Vin Diesel joins us for Joli-Day Beach at Minitas beach!