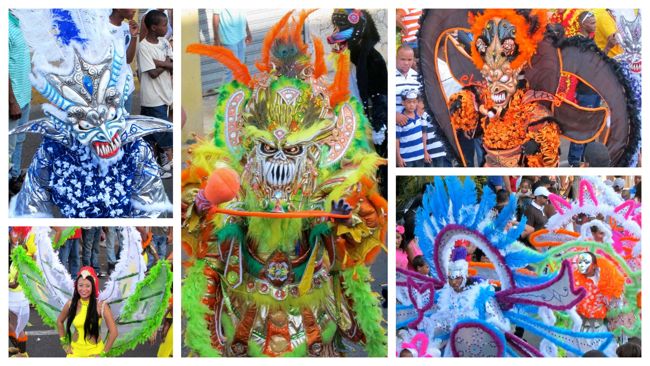 Excitement, vibrant colors, drums, music and a festive ambience are all synonymous with the Dominican Carnival season celebrated every year in the months of February and March across the Dominican Republic. The principal carnival, the “Carnaval Dominicano” or the “Carnaval Vegano” takes place every Sunday through February and attracts thousands of Dominicans and tourists to take part in the action!

Although not an official Dominican Holiday itself, Dominican Carnival is quite an event and definitely one of the biggest celebrations in the country!

The Dominican Carnival, celebrates a mixture of rituals, cultures and traditions inherited from the ancestors of the Dominican people; the Taínos, Africans and Europeans. It is thought the Dominican Carnival or “Carnaval Dominicano” was brought to the country by Christopher Columbus, with evidence that this annual tradition started at some point in the 1500’s. Always celebrated before Semana Santa (Easter week), the “Carnaval Dominicano” in many ways simulates the “carnestoladas” of Spain.

The Dominican Republic’s largest, most famous and oldest Carnaval is the “Carnaval Vegano” whose 500 year history started in the year 1510! Taking place in the town of La Vega, located approximately 2 hours North of Santo Domingo and a 4 hour drive from Casa de Campo and La Romana, the “Carnaval Vegano” takes place every Sunday throughout the month of February, which culminates with the biggest celebration on the last Sunday of the month (this year the 26th) – which marks Dominican Independence day (on the 27th.)

During the “Carnaval Vegano”, La Vega is overtaken by people from across the country and the world who fill the streets, dancing along to the music and enjoying the spectacular parade filled with colors, magnificent costumes and contagious tropical music.

The largest and the most commercialized Carnaval in the Dominican Republic, the Carnaval Vegano has numerous sponsors (who pay hundreds of thousands of dollars for the privilege),  concerts with headliners such as Daddy Yankee, Victor Manuelle and the Hermanos Rosario who play at the La Vega Olympic stadium, as well as the crowning of the “Miss Carnaval Vegano.”

Following the ever growing popularity of the Carnaval Vegano, carnival fever has now spread across the entire Dominican Republic, with carnivals now being celebrated in most cities and towns.

Since the “Carnaval Dominicano” is a celebration which is quite closely liked with the Dominican Republic’s history and culture, there are various famous characters which are involved in these parades – with plenty of stories to tell! The main ones are the feared “Diablos Cojuelos”, along with “El Robalagallina”, “Califé” and “Se me muere Rebecca”.

So for those of you unfamiliar with these famous Carnaval characters (which you will definitely see at the parades in La Romana, Santo Domingo and La Vega) here is a description each:

If you don’t see any of these during the Carnival, then you are not in the Dominican Republic! And believe me, you’ll definitely watch out for these, since their ‘job’ is to frighten the audience as they dance and hit those in their path with their weapon – balloons made out of a really hard material (in the past an animal bladder)! So watch out, it is really painful!

This  is “Roba la Gallina” which stands for “Chicken Thief”. In the past, people who were caught stealing their neighbors or anybody’s chickens were punished – they had chicken feathers stuck to their bodies and were forced to walk this in public. The character, however is intended to be funny, generally interpreted by a man dressed as a woman, dressed in colorful costumes and huge hips!

Don’t be surprised if you suddenly see a desperate lady running around with a sick child, shouting “Ay, se me muere Rebecca!” (My Rebecca is dying!), Her role in the parade (apart from screaming) is to receive sweets for her sick child and then give them away to the many children who follow her around for these!

It’s the local celebrities worst nightmare! These characters criticize politics and other important social and cultural public figures – they don’t have any set costume, but you’ll spot them because they are the funniest! The above photo of the “Califé” was taken during the La Romana Carnaval 2011 – ‘Llego JaJa’, a funny (and critical) take on the political campaign ‘Llego Papa’ of Presidential candidate (and past President) Hipolito Mejia.

Not only do these characters tell stories, but they also perform and dance to numerous music; one song most associated with the “Carnaval Dominicano”, is “Baile en la calle” (Dancing in the streets), composed by the Dominican singer and songwritter Luis Dias, which since 1983 has been played repeatedly in Dominican carnival parades. As well as this song other magical rythms are played with accordions inherited from Europeans, “güiras” from our native Indians the “Taínos” and drums from our African ancestors.

The people and ambience

The parade which is integrated by these many famous characters, has for a long time, (or at least in La Vega and La Romana) included the participation of the crowd, with many people attending with painted faces or dressed up in their own original and hilarious costumes… a different way of joining the celebration!

Mickey Mouse and Winnie the Pooh at  the Dominican Carnival

There are many situations which you will only see in the Dominican Republic. Don’t be surprised if in the middle of some dancing “Diablos Cojuelos” and crying “Se Me Muere Rebecca” you suddenly find a running Mickey Mouse, Barney, Winnie the Pooh or “Dorah the Explorer”! – Dressing up has somehow become for many an important requirement in the Dominican Carnivals and believe it or not, the Disney characters have somehow been included in this celebrations for several years! Why? I really don’t know.. but it happens!