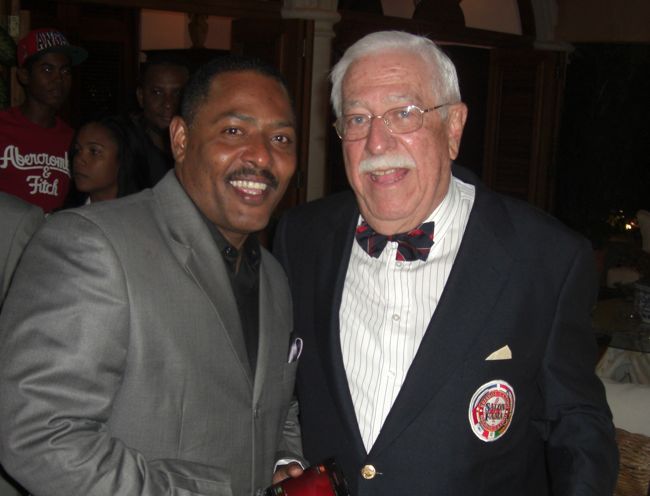 The Salon de la Fama del Beísbol Latino was founded by Roberto Weill, Alfy Fanjul and Rafael Avila in 2009 to celebrate the achievements of  hispanic and Caribbean Major League Baseball players – who are largely absent from the National Baseball Hall of Fame in New York. And this past weekend the rising star of Latin baseball was truly honored with a series of special events and activities that took place in Casa de Campo and La Romana.

Here we bring you an overview of the celebrations surrounding the “3rd exaltations to the Latino Baseball Hall of Fame”, which took place in and around Casa de Campo from the 9th to the 11th of February 2012.

The Inauguration of the Salon de la Fama Fan Cave

The Salon de la Fama Fan Cave located on the Paseo del Mar in the Marina Casa de Campo was officially inaugurated on Thursday the 9th of February during a ceremony led by Roberto Weill, founder and president of the Salon de La Fama and attended by the baseball luminaries and VIP Casa de Campo guests. The Salon de la Fama fan cave is filled with baseball memorabilia and will serve not only as an office, but also as a place where fans will be able to go and watch past games in the lounge area.

This star-studded occasion brought together Casa de Campo’s VIPs and special guests from La Romana with the baseball luminaries, a fantastic opportunity for the Baseball legends, many such as Bernie Williams who were visiting Casa de Campo for the first time, to enjoy a little of the glamorous Casa de Campo luxury lifestyle. Guests enjoyed a cocktail on the terrace (with many photo opportunities), as well as a candlelit dinner around the Weill’s pool.

The “Paseo de los Inmortales” was the immortalization ceremony of those players exalted into the Salon de la Fame last year (2011) – these players unveiled their statues in the park of La Romana, where they will now stand alongside the statues of those players exalted in the first class of 2010. Taking part in the ceremony were the baseball luminaries; Dominican legend “Don Felipe Rojas Alou”, Tommy Lasorda and Andrés Galarraga among others as well as José Ignacio Morales whose workshop “El Artistico” created the sculptures and the Major of La Romana Tony Adames. Many La Romana locals turned out for the ceremony and were rewarded with the opportunity to take photos and get autographs of the Latino baseball legends.

As one of the founding members of the Salon de la Fama and the honorary chairman, CEO of the Central Romana Corporation Alfy Fanjul hosted a magnificent dinner at his Casa de Campo estate Casa Grande. Baseball luminaries and VIP Casa de Campo guests enjoyed cocktails on the terrace and dinner on the lawn whilst they reminisced and shared tales of great baseball games and victories.

On Saturday morning the 11th of February, Casa de Campo baseball fans came together with the famous baseball luminaries for a friendly golf tournament played on Casa de Campo’s famous Teeth of the Dog golf course. The tournament was played in a “best ball” format with each team including 1 baseball luminary – giving baseball fans the chance to “strike out” alongside some of the most famous names in Latin baseball.

Celebrated at Casa de Campo’s majestic 5,000 seater open-air amphitheater in Altos de Chavón, the “Grand Exaltation Ceremony” attracted a crowd of baseball fans from Casa de Campo, La Romana and across the Dominican Republic who turned out to see the baseball legends of the “Class of 2012” be exalted into the “Salon de la Fama del Besibol Latino.”

Exalted into the Latino Baseball Hall of Fame this year were:

As well as the “class of 2012” luminaries many Baseball legends exalted in both 2011 and 2010 took this opportunity to return to Casa de Campo and enjoy the event with their families for a 2nd or even a 3rd year running, such as: Felipe Rojas Alou, Tommy Lasorda, Andrés Galarraga, Tony Oliva, Tony “Cabeza” Fernández and Denis Martinez.

Also in attendance was Jennifer Steinbrenner, daughter of former owner of the New York Yankees, George Steinbrenner and Dominican baseball player Pedro Martínez, who in his 17 year career playing in the Major Leagues was a pitcher for the Los Angeles Dodgers, Montreal Expos, Bostin Red Sox, New York Mets and Philadelphia Phillies.