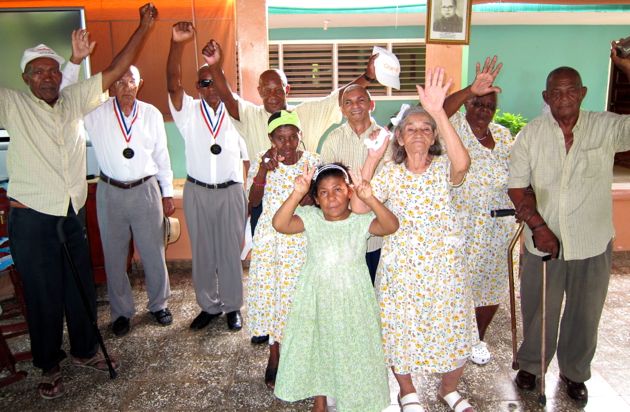 On Wednesday July 4th 2012, as well as all the American Independence Day celebrations such as the Donkey Polo at Minitas Beach, another wonderful celebration was held in La Romana – a fun and exciting National Domino Tournament played at the Padre Abreu Nursing Home, where many of it’s members and guests from other nursing homes in the Eastern region of the Dominican Republic took part in the 2nd annual contest organized by the “Fundación NTD Ingredientes” foundation.

Throughout July from the 4th to the 28th, the 2nd annual Inter-Nursing Homes National Domino Tournament will be played out between competitors from nursing homes across the country – an event which marks an upcoming Dominican National Holiday, Father’s Day on Sunday July 29th.

The tournament was a heart-touching celebration for more than 55 friendly and smiling faces, who beamed with nothing but enthusiasm and youth itself! After a quitely battled competition which lasted all day, a pair of gentlemen ended as the regional finalists AND much to the delight of all attendees, these two gentlemen, Ramon Vasquez, affectionately called Monchín and his partner Santo Valerio, were both representatives of the Padre Abreu Nursing Home – winning much-deserved medals!

Thus, in order to encourage the development of recreational activities for seniors, this event included not only the 2nd edition of the Dominoes tournament with the participation of a wonderful group of handsome and wise grandparents who gathered at the Padre Abreu Nursing Home in La Romana, but also a number of other joyful activities, such as music, nibbles, dancing and even an extraordinary performance directed by themselves – a celebration which took place throughout the day, from morning to way past 4pm!

“We all want to live, but none of us like the idea of growing old. There are no facilities, no development, people still feel sad when visiting nursing homes in our country…this reality must be changed. I have my family today, but I do not know if tomorrow I will have them and I may not have enough money to pay for one of these homes. What would happen to our parents if we pass away before they do?

Let’s start by gradually improving our nursing homes, it’s up to us to continue exploring. It is always said that children are the future, but growing old is actually OUR future””

Later this month, on the 28th of July 2012, both Monchín and don Valerio will be representing La Romana and of course their beloved Padre Abreu Nursing Home in the 2nd annual National Domino Tournament finals in Club Naco in Santo Domingo – we wish you all good luck! We are pretty sure they will bring the prize home!!

About the Fundación Ingredientes NTD foundation

The Fundación NTD Ingredientes foundation was created with the mission of improving the quality and welfare of members of the Nursing Homes of the Dominican Republic, raising awareness among the communities and government on the needs of these homes, with the purpose of ensuring comfort and their dignity on the last stage of their lives.
For more information visit: www.fundacionntdingredientes.org

About the Padre Abreu Nursing Home

The Padre Abreu Nursing Home was founded in 1954 by initiatives of Father Abreu, who acting in response to the absence of shelter and protection of the elderly in the town of La Romana. At this time, they established a small home in the “La Aviación” sector, giving it the name of “Bethania Nursing Home.”

Later the home was transferred to the Juan Utrera street, whilst a new home was constructed on land donated by the Central Romana Corporation and thanks to the efforts of many local residents, this wonderful and peacful home that today takes care of 55 adorable grandpas and grandmas is known as the “Hogar de Ancianos Padre Abreu” in honor of Father Abreu who passed away in 1981.