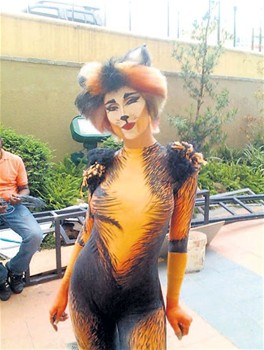 The world-famous Andrew Llyod Webber musical “Cats” is being shown at the Palacio de Bellas Artes, on Maximo Gomez Avenue. The production opened last friday the 8th of May and will continue through the weekend of the 31st of May, playing Friday and Saturday evenings at 8:30pm and Sundays at 6pm. The show is being produced and directed by Amaury Sanchez and has been translated into Spanish by Mariano Detry.

The musical “Cats” is an all-singing, all-dancing musical spectacular based on the poems in ‘Old Possum’s Book of Practical Cats’ by T.S. Eliot and was first performed in 1981 in London and made its debut on Broadway in 1982 and ran for 21 and 18 years, respectively. It has won numerous awards, including both the Laurence Olivier Award and the Tony Award for best musical, has been performed all over the world and translated into 20 languages.

With the show being heralded as a huge success in the Dominican newspapers, and tickets selling out fast now is the time to buy your ticket. Tickets are available from the Palacio de Bellas Artes.