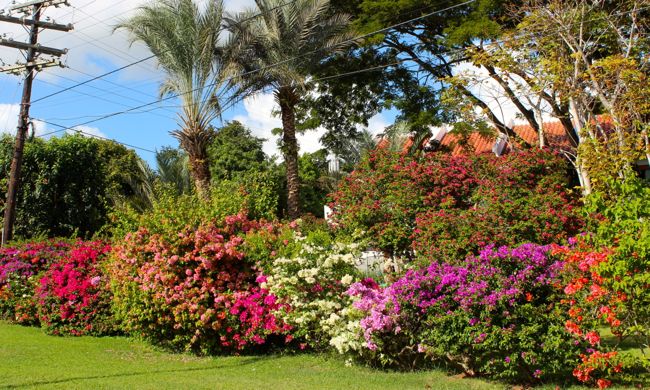 Have you noticed them? Just outside of Casa de Campo’s Minitas Beach is the most beautiful array of bougainvillea flowers.

Now that “Hurricane Season” has come to an end, the bougainvillea are starting to bloom once more and Casa de Campo is filled with the most beautiful bougainvillea flowers, blossoming across the golf courses, in gardens and all along the sides of the road.

However the most beautiful bougainvillea of them all can be found just outside of Minitas Beach, literally opposite the entrance/exit to the car park. Here in a stretch not more than a few meters long the most brilliantly colorful bougainvillea can be admired. In white, orange, cream, purple and a variety of different shades of pink from vibrant to soft, there is no doubt that these bougainvillea are the most spectacular that we have seen in the entire Casa de Campo resort. There is even one which is a mix of baby pink and light orange, absolutely incredible!

Native to South America, Bougainvillea were first brought to the Caribbean, Europe and the Americas in the 1700’s by Louis Antoine de Bougainville, after whom they are named. In the Dominican Republic this spectacular bloom is known as “Flores de la Trinitaria”, which many falsely assume to be related to “La Trinitaria” the secret society led by Juan Pablo Duarte, responsible for gaining Dominican Independence in 1844. However the name “Trinitaria” can actually be attributed to the country Trinidad, because it was from there that the flower was imported from to the Dominican Republic.

Surprisingly, the most colorful element of the Bougainvillea are in fact not the flowers – they are bracts, a special type of leaf, which surrounds the small, white, inconspicuous flower at the center.