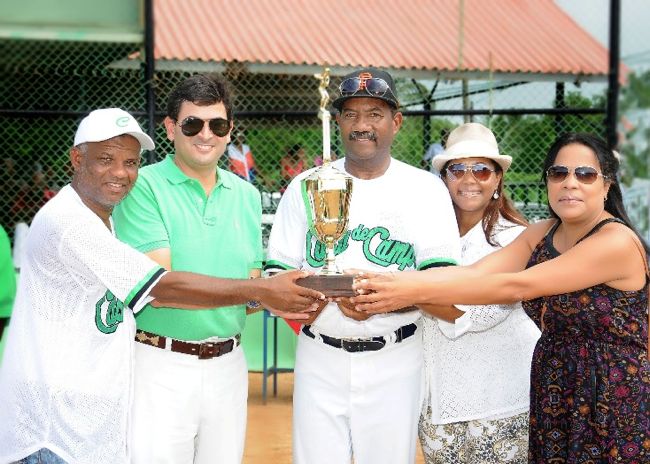 The 2013 edition of the tournament was inaugurated recently – during which Casa de Campo was presented with their trophy as champions for 2012 tournament. The perfect way to start this year’s event! During the inaguration, Daniel Hernandez, manager of the Casa de Campo Hotel and Sarah Pelegrin from Public Relations took part in the prize-giving, posed for photographs with the players, and even took their turn at batting, pitching and catching.

The first 2 games of the “Gran Copa Navideña 2013” have already taken place on the 13th and the 15th of October, and tonight, Tuesday the 22nd of October the tournament continues at 7pm with team Casa de Campo competing against Los Cañeros.

The other Central Romana departments taking part in this year’s tournament are Fabricación, Administración and Escuela de Tráfico. Good luck to you all, we look forward to finding out who wins this year!

Just like the Dominican Baseball League, the softball games of the “Gran Copa Navideña 2013” will continue through December – please see the schedule of games below.

After 2 months of fierce competition between the departments… Casa de Campo made it to the final!

In the final, Casa de Campo played a 5-4 game, with winning pitcher Tomas Rosario. Some of the outstanding players were Wandy Rodriguez with 2 singles and 1 run scored, Malfre Ramirez with 1 triplet and 1 RBI (run base impulse), Reynaldo Vargas with 1 single and 1 RBI and finally the MVP (Most Valuable Player) Radhames Ramos with 2 singles, 1 run scored and 2 RBI.

The following collection of photos were taken during the inauguration of the “Gran Copa Navideña 2013”, which included the prize-giving for Casa de Campo: