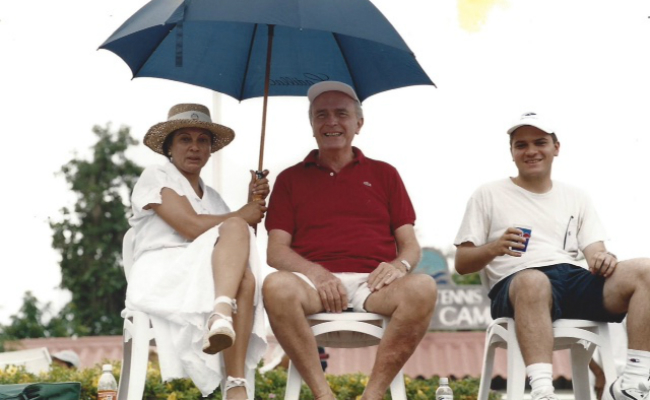 Following the passing of Don Enzo Mastrolilli, founder of the Casa de Campo Tennis Cup, on December 15th 2014, Casa de Campo decided to dedicate the 2015 edition of the event in his memory.

It all started back in 1978 when Don Enzo Mastrolilli, then President of Ron Siboney (Siboney rum), masterminded a plan to host the Dominican Republic’s leading tennis event here in Casa de Campo. Together with Juan Rios, Casa de Campo’s first Director of Tennis, he flew out to Puerto Rico where he met with Ramon and Luchy Mendez, who became the event’s co-founders. Thanks to this partnership, the tournament has always been well-attended by many Puerto Rican players, and is in fact still attended every year by Ramon and Luchy themselves.

Over the years, Don Enzo’s passion for the sport and dedication to the tournament ensured its success. In the early days he would host a “caravana” (a parade) that would bring the Casa de Campo Tennis Cup from Santo Domingo to Casa de Campo in a convertible car carrying “Siboney (rum) Chicas”. He always ensured the event was well covered in the press and personally invited some of the country’s most important people to attend as his guests.

As the years went by, Don Enzo’s support never faltered. When later in life he became the president of Proseguros, the company became the lead sponsor.

This year celebrating it’s 38th anniversary the Casa de Campo Tennis Cup will be played at La Terrazza Tennis Center from the 3rd to the 6th of September. The physical absence of Don Enzo at this year’s event will be keenly felt, and yet his memory will live in the hearts of his family and friends, as well as on the category B trophy, which from this year forward will be known as the Vincenzo Mastrolilli Trophy.

Registration for the 38th annual Casa de Campo Tennis Cup is now open, and information is as follows:

Need info on how to reserve from abroad? Click the image: