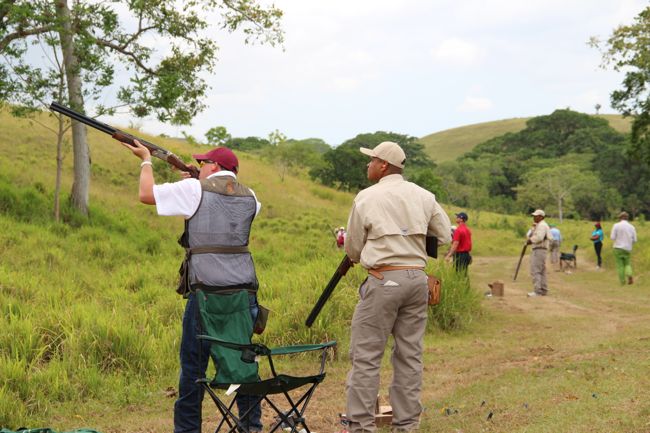 Hosted annually by J.Pepe Fanjul, the Sugar Shooting tournament gathers the most extraordinary group of people, keen shots from across the globe who come together for a week of unrivalled shooting, as well as fine dining in Casa de Campo’s numerous restaurants. This year approximately 40 will be taking part in the tournament, “a fun group”, J.Pepe Fanjul told Casa de Campo Living during the field shoot at Rancho Peligro yesterday.

The tournament opened with 8 guns who flew into Rancho Peligro from Casa Grande in the afternoon for the European Style Driven Bird Shoot. With comments such as “what fun” and “that was awesome” it was clear everyone had a great time.

[On a style note, while most of the gentlemen had opted for subdued earthy tones, a fellow journalist commented on my own outfit “that is the brightest outfit I have ever seen at a shooting event” said John, a fellow Brit. Which given that I was sporting an orange cap with a yellow, orange and pink scarf, blue top and jeans and pink shoes, I think he may be right… I didn’t take any photos of myself so I’ll just leave you to image how stylish (or not) that looked.]

The Casa de Campo Sugar Shooting tournament consists of numerous different shooting tournaments; the Live Pigeon Shoot, the Colombaire and the Sporting Clays, as well as the European Style Driven Bird Shoot at Rancho Peligro. And although the tournament presents prizes to the winners of each category there are also 2 trophies for the overall winners; the High Overall “GUBELMANN CUP” won by Mason Berry and the High Overall Cup won by Andres Fanjul Jr. in last year’s event.

The first Casa de Campo Sugar Shooting Tournament took place in 1988, hosted by J. Pepe Fanjul in celebration of the opening of a new and improved Shooting facility; the Casa de Campo Shooting Center, which, was originally located near to the Casa de Campo Polo Fields, had just re-opened with a Sporting Clays circuit of more than 200 stations, two pigeon rings, and a skeet and trap facility. 15 years later, following the appointment of new Director of Shooting; Shaun Snell, a new shooting facility at Rancho Peligro for European Style Driven Bird Shooting was opened, allowing the tournament to grown from a 4-day event to a 6-day event. Today, this prestigious occasion incorporates the Live Pigeon Shoot, the Colombaire and the Sporting Clays, as well as the European Style Driven Bird Shoot at Rancho Peligro, all accompanied by various cocktail parties and dinners.

On Saturday April 26th, Andres Fanjul Jr., the nephew of J.Pepe Fanjul was crowned the champion of the 27th annual Casa de Campo Sugar Shooting Tournament, as the winner of the High Overall Cup.