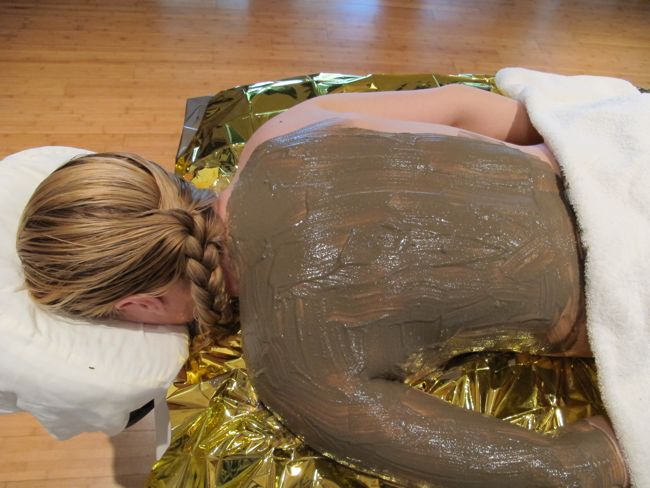 It is quiet simply wonderful when I can work and pamper myself at the same time – which is exactly what I was able to do at the Casa de Campo Spa recently when I was invited by Spa Manager, Arabelle Del Pilar Rosario to review the 100% organic Algamoor Body Wrap. Such hard arduos work, but someone has to do it!

“This treatment has many therapeutic benefits – it is anti-inflamatory, detoxify and very remineralizing. It can also help reduce the appearance of scars. I would recommend this treatment to everyone that needs a detox and also a deep skin hydration – it is even suitable to be used on the face.”

As is customary and one of the true luxuries of the Casa de Campo Spa, my pampering experience began when I was led to my own private cabana by my masseuse, where I changed into my Casa de Campo Spa robe and slippers – heavenly!

And so without further a-do a found myself on the massage table lying on a golden foil sheet (for the “wrap” aspect of the massage) and was by the hands of my expert masseuse exfoliated all over with the Rosemary-Sea Salt Exfoliation, which felt very invigorating – and was certainly effective in removing all the dead skin!

Next, I was covered all over with the Algamoor (as you can see in the photo), which after the good scrubbing felt very soothing, and as it was a rainy, slightly chilly day I opted to have it applied warm, which was just lovely. Once applied all over the golden foil sheet (technically called a “mylar”) was wrapped around me, engulfing me in a giant golden cocoon – to give the sea algae in the Algamoor time to work it’s magic, whilst I received a feet, neck, arm and head massage.

The treatment ended after a quick shower to rinse off all the Algamoor (don’t worry – you wash yourself in your own private bathroom), and a full body hydration mini-massage when a sumptuous seaweed body cream ( with sun protection) was rubbed gently into my skin – leaving me soft and smooth all over!

What is the Algamoor Body Wrap?

The Algamoor Body Wrap treatment is purifying, detoxifying and hyrdrating – including a full body scrub, full body mask made with Algamoor and a massage.

Algamoor is a unique, rich, 10,000 year old substance, extracted from a 50 feet thick deposit beneath a pristine lake bed in Northern Germany. The Algamoor was formed in a very similar way to Moor mud, but is composed entirely of algae instead of plant matter

Algamoor was originally discovered in 1920. In 1933 it was analyzed by German scientists and is now used by many hospitals and clinics in Northern Germany for applications in dermatology, gynaecology, rheumatology as well as cosmetics and sports injuries. The Algamoor conists of over 10 different species of algae and is also rich in minerals including: magnesium, calcium, manganese, iron, silicon and sulphur.

Click here to find out more and get pampered!

Located in the main Casa de Campo hotel area, a haven of tranquility, where each client enjoys their massage or treatment in the privacy of their own cabaña.