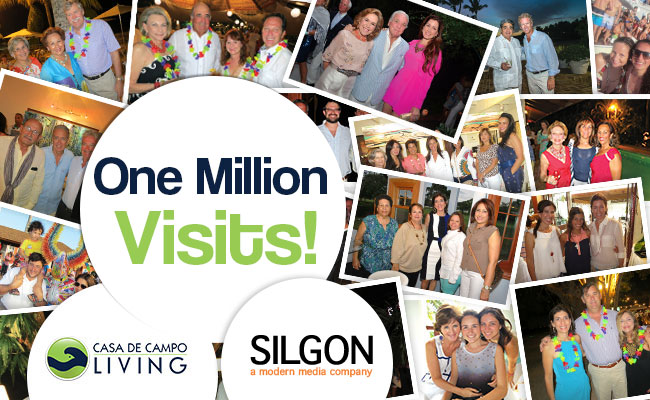 As the creators of Casa de Campo Living, we SILGON, modern media company based in Altos de Chavón, Casa de Campo are very proud to announce that this month we officially passed more than 1 million visits. Modesty aside, for much of the Casa de Campo community, Casa de Campo Living has become an invaluable resource for finding out all Casa de Campo news and events, but don’t take our word for it, here are just a few comments we’ve received recently from our enthusiastic readers:

“I want to congratulate you on the amazing job you’ve done with Casa de Campo Living. You’ve made Casa de Campo so much more fun!” — Juan Oscar Geraldino

“You really do a wonderful job for everyone.” — Phyllis Berney

“You are the best at keeping those of us ‘off island’ up to date. Many thanks!” — Hilde Callaghan

“I’m addicted to your newsletter. Thank you” — Alejandra Rodriguez Sone

“You are to be congratulated on your wonderful coverage of the events in Casa de Campo.” — Muffi James

[If you would like to let us know how much you love Casa de Campo Living – please do not hesitate to contact us – we would love to hear from you!]

So how did this all come about?

In 2007, Philip Silvestri (CEO and founder of SILGON) after a day of work in the office was wondering: “what is there to do tonight?” A wonderment he could not find an answer to, with literally nowhere to find out what was going on, there was no easy way to answer that question. And so Casa de Campo Living was born, as a way to keep ourselves, and everyone else up to date on all Casa de Campo news and events.

Starting out slowly, Casa de Campo Living was a “blog” and the hobby of Philip Silvestri and his friend Rodolfo Bournigal. A website which although interesting and occasionally informative was not part of the SILGON day-to-day and so was not prioritized.

From 2007 to 2009, Casa de Campo gathered a faithful following and received a respectable 500 visits per month.

And then a woman changed everything. And that woman was me – Rebecca Hughes. In August 2008, I arrived to the Dominican Republic and La Romana as a math teacher in the Abraham Lincoln School. Shortly after arriving, I met Philip Silvestri at the Casa de Campo villa of Benny Abad, we fell in love and now 5 years later we are (finally) engaged. (If you didn’t yet read the engagement story – click here.)

I had always wanted to be a writer. And so when Philip suggested I write something Casa de Campo Living (www.casadecampoliving.com), there was no turning back. My first article was published on March 16th 2009, a simple piece that nowadays I would write in 20 minutes, but at the time took me the best part of a day.

After that I started to write more and more… and became increasingly frustrated at having to wait to see my articles published. To start with Philip, or one of his team, would have to prepare each piece, edit it – which I hated – and then publish when they were ready. In September 2009 I took over and announced myself as “editor of Casa de Campo Living”. Motivated and excited at being an editor, I worked endlessly on Casa de Campo Living – attending events, taking photos, publishing event coverage and event notifications – it was long hard work, but I loved it. Fortunately all the hard work paid off as we got more and more readers and followers. I became known for being everywhere – with my camera.

By 2010, traffic had increased substantially, and we had started to accept our first advertisers, who were keen to reach our unique and hard-to-reach community. These advertisers, coupled with my passion for the project, as well as a very supportive boyfriend/boss meant that I was able to leave teaching behind and start working full-time as an editor. It was a case of we were going to make it work or kill each other trying!

Although there has always been plenty going on here in Casa de Campo – back in 2010 we wanted more – so we started the Casa de Campo Living events! Remember the ChiChiGua Fest? The Hoedown? Joli-Day Beach? With these community orientated fun family activities we were able to unite the community, have a great time and really get to know everyone (and vice versa).

Click here for a summary of all the Casa de Campo Living events we celebrated in 2011.

In doing these events we succeeded in showing businesses that there is an active community in Casa de Campo, willing and enthusiastic about attending events, and since then we have been thrilled to see many more events and activities being organized – just check out that TODO.fm calendar and you’ll see just how much is going on nowadays!

While we loved creating the events – and have plans to re-start some of our favorites this year – it was time to expand. While Casa de Campo Living continued to go from strength to strength – with monthly visitors topping 35,000 (and nearly 100,000 page views), we decided to create more publications. Throughout 2012 and 2013, SILGON launched TODO Casa de Campo, TODO La Romana – Bayahibe, as well as INMORTALES, the official publication of the Latino Baseball Hall of Fame.

Starting this new year, having just reached 1,000,000 visits, our passion and commitment to you, our Casa de Campo community, is as strong as ever. If you have any comments, suggestions, or would just like to say hello – please do not hesitate to contact us using the form below.

Here’s to a bigger, brighter future!