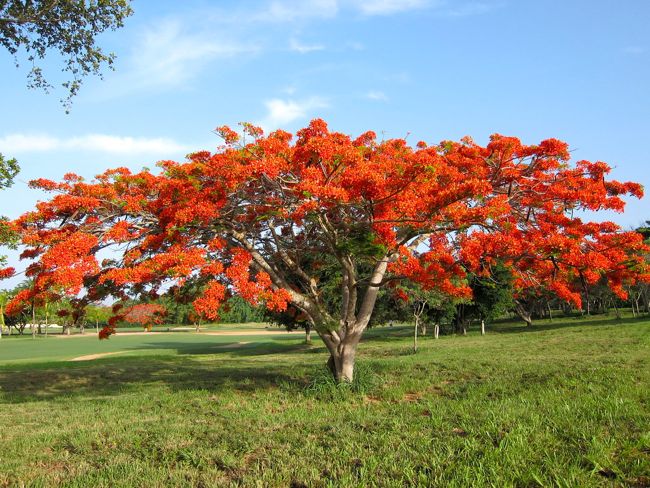 The flowery Flamboyant season has begun! From June to September, the Flamboyant trees in Casa de Campo and throughout Dominican Republic will delight us with their bright red-orange flowers -so beautiful they have been an inspiration for many Dominican painters, such as Morel Jorge Octavio Tavares, better known as Yoryi Morel, one of the most important artists in the country.

How could a painter not fall in love with this majestic tree? To elaborate on why the Flamboyant has featured in the paintings of so many Dominican artists we invite Irene Rodríguez- Artist in Residence 2012 and current teacher at the Altos de Chavón School of Art and Design (click here to learn more about Irene) – to share with us her impressions.

“From Spring to Autumn, painters, poets, writers, photographers, musicians… we all succumb to its amazing beauty, to their majestic and beautiful design – which tinges with red-orange in contrast to the bright green of their prolific leaves, ” says Irene.

Irene thinks that Yoryi Morel, a great Dominican costumbrist-impressionist, was captivated by their beauty, “and there is no better interpreter of its imposing presence in the Dominican countryside. His work is his testimony. And not only Morel, others like Prats Ventos have revered the beauty of this tree, ” she added.

“From childhood the beauty of this tree conquered me with its spectacular flowers and explosion of color, the bright green of its leaves, their dark brown seed pods. I am not alone, everyone at some point has been under the spell of the beauty of this majestic tree, one of the most striking in the world. La Vega Real (a province in the north of the Dominican Republic), also known as the “City of Flamboyants” with its large Flamboyants on the main Avenue honoring Dr. José Horacio Alvarez, is an example, ” said Irene Rodriguez, Graphic Designer.

The Flamboyant “a great design of nature” in summary:

The following is a wonderful article written by Vivian Dickson Morato about these splendid “Ladies in Red” in Casa de Campo:

Have you noticed? They have dressed up in their best finery, mostly in fiery shades of orange and red, and playfully dance in the wind to their own magic tunes, majestically and flirtatious at the same time, like coquettes. But they are rather faithful girls, the lot of them – they actually put the same colorful spectacle on scene for us each year from May to September.