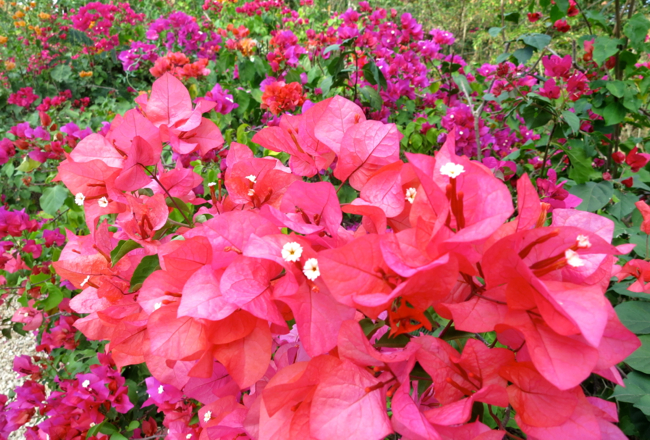 Have you noticed? Casa de Campo looks blooming gorgeous right now! Wherever you go the most vibrant bougainvillea can be found flowering in pretty pink, blue, orange, purple and white!

In fact, Casa de Campo and the bougainvillea are looking so spectacular right now that last Sunday I set out on a golf cart ride and took pretty photos all over the resort – which if you have some spare time I really recommend – it’s such fun and it really is beautiful out there right now!

Native to South America, Bougainvillea were first brought to the Caribbean, Europe and the Americas in the 1700’s by Louis Antoine de Bougainville, after whom they are named. In the Dominican Republic this spectacular bloom is known as “Flores de la Trinitaria”, which many falsely assume to be related to “La Trinitaria” the secret society led by Juan Pablo Duarte, responsible for gaining Dominican Independence in 1844. However the name “Trinitaria” can actually be attributed to the country Trinidad, because it was from there that the flower was imported from to the Dominican Republic.

Surprisingly, the most colorful element of the Bougainvillea are in fact not the flowers – they are bracts, a special type of leaf, which surrounds the small, white, inconspicuous flower at the center.

Why bloom now? Well as Casa de Campo basks in endless days of sunshine (it hasn’t rained for weeks… ) – the bougainvillea get more beautiful by the day – because they dislike the rain as much as we do when we’re out having a BBQ or sunbathing! In fact right now is the best season for the bougainvillea, as from December to April is the “dry season” in the Dominican Republic.

Sadly at the end of April, as it starts to get a little rainer – the bougainvillea will start to fade – but the good news is that then the magnificent and fiery Flamboyant trees start to bloom (from May to September)! So although in April we will have to say goodbye to the Bougainvillea is won’t be long before Casa de Campo blooms once more and the Flamboyant in stunning shades of red, orange and yellow will put on their show!

Dressed up in their best finery, mostly in fiery shades of orange and red, they playfully dance in the wind to their own magic tunes, majestically and flirtatious at the same time, like coquettes. But they are rather faithful girls, the lot of them – they actually put the same colorful spectacle on scene for us each year from May to September.

Click here to read more about the Flamboyant trees!