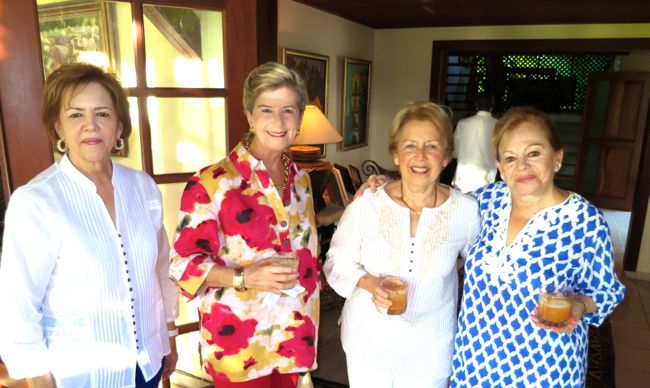 Taking place in her beautiful Casa de Campo villa overlooking the Links golf course, Isabel’s many guests enjoyed cocktails and catched up on everything new and exciting going on in Casa de Campo! Amongst the topics of conversation was the new restaurant “The Club” in Altos de Chavón, which several guests commented is superb – and we agree – Philip and I recently enjoyed the “Mixed Grill” (RD$980 including taxes) and it was delicious.

For nibbles, Isabel had created a buffet table of treats including humus and kipes which were very popular, as well as a variety of salads and other delicious goodies, which tempted us all to treat ourselves on a Friday night! Standing majestic at the center of the buffet table was a beautiful and rather unusual arrangement of flowers – which had been sent to Isabel by Annie Paniagua, who sadly was unable to attend the gathering.

Amongst the guests was Xiomara Menéndez founder of the Hogar del Niño – who recently hosted a magnificent “Adopt a Crib” dinner at her Casa de Campo villa in Bahía Minitas (click here for photos), with her two daughters; Xiomarita Matos President of the Hogar del Niño, and Erika Vilain – who much to everyone’s amusement arrived on a pasola with a teddy bear shaped purse!

Funnily enough Pasola’s (mopeds) have become very fashionable now in Casa de Campo – popular as a quick an easy way to get around – they’re for sale at Eco Planeta Caribe in the Marina Casa de Campo if you want to be “de moda” too!

The following photos were taken on Friday the 12th of April at the Café de la Leche at the Casa de Campo villa of Isabel Purcell:

Unlucky in some cultures “Friday the 13th” turned out to be lucky for elegant hostess Isabel and her glamorous Casa de Campo guests – having rained all afternoon, the rain stopped exactly as the first guests were arriving to the event and by the time the majority were sipping on their first glass of chilled wine the sun has started to shine again!

On April Fools Day, Friday April the 1st, Casa de Campo’s female society gathered at the Casa de Campo villa of Isabel Purcell for an afternoon of gossip, drinks and snacks…..and all in the name of gathering supplies for the Hogar del Niño! Whilst I spent the day giggling over my April fools Day joke about the ‘Real Housewives of Casa de Campo’, this month’s Cafe de La Leche hostess Isabell Purcell spent the day preparing her home for her special Cafe de la Leche guests and boy to we enjoy it!