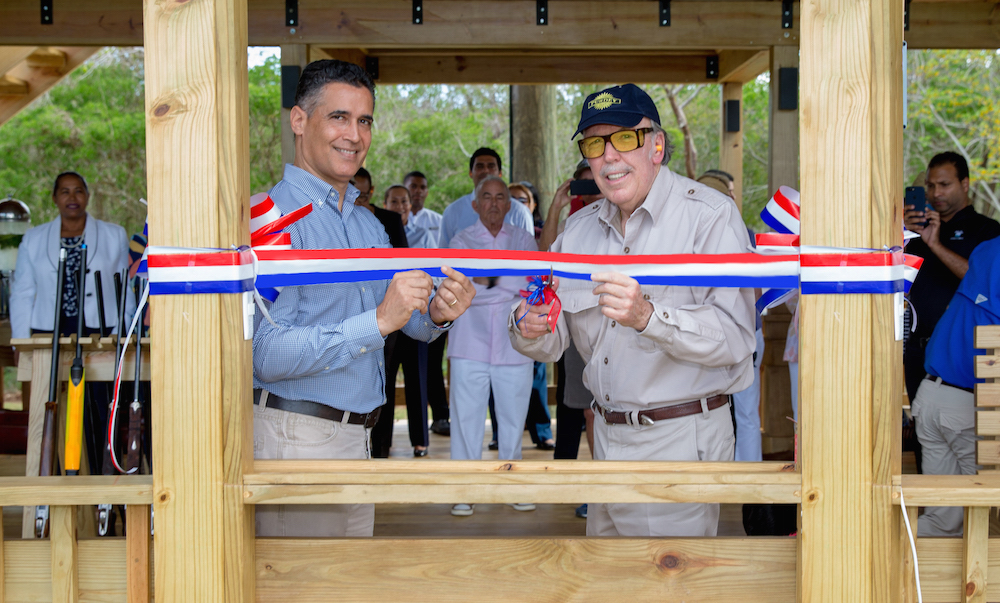 In keeping with Casa de Campo’s Shooting center’s reputation as being the top clay pigeon shooting venue in the Caribbean,  a new all-weather five stand building has recently been constructed to offer its guests a true world class clay shooting opportunity.  With the presence of the Casa de Campo community and Sugar Shooting Tournament participants, the facilities were inaugurated on April 22nd by Mr. J. Pepe Fanjul as part of this year’s Sugar Shooting Tournament. There was also a shooting exhibition with the new Purdey sporting clay guns.

Set amid tropical sunshine and sparkling turquoise waters, Casa De Campo is home to a 245-acre Shooting Club nestled in the dense foliage of the Dominican jungle. Shooting aficionados can experience more than 200 stations for trap, skeet, and sporting clays, but the Club is also known for featuring one of the largest shooting towers in the world, standing stately at 110 ft.

Jason Kycek from Casa De Campo commented: “As an alternative to a traditional sporting clays course, the “Five Stand” comes to the fore. This relatively new game in the shooting world has it all. If you were to put trap, skeet, and sporting clays in a blender, Five Stand would pour out. Five stand is more exciting than trap and throws a wider variety of patterns than skeet. It’s also faster and cheaper than sporting clays. It gives shooters the opportunity to work on shots simulating everything from fleeing rabbits and flushing quail to ducks dropping into a set of decoys.”

He continues “The shooting center is just one of the many facilities on offer to those visiting Casa De Campo. While many guests visit purely on the strength of our shooting facilities, at the other end of the scale, many more have never picked up a gun. Our facilities are designed to meet the needs of all of our guests, whatever their level of experience.”

A wide variety of targets can be thrown to suit the complete novice right up to the advanced shooter. All the stands are undercover so guests can still shoot clays even on the wettest of days. More experienced guests will even be able to try a night shoot.

A team of instructors offer basic shooting orientation as well as advanced instruction if requested. Gun rental and ammunition are also available on-site. All-inclusive packages include one round of 25 shots skeet/trap shooting. Additional shots are bookable locally.

The following photos were taken by Bryan de la Cruz on Monday, April 22nd during the inauguration of the new 5 stand building at the Casa de Campo Shooting Center: