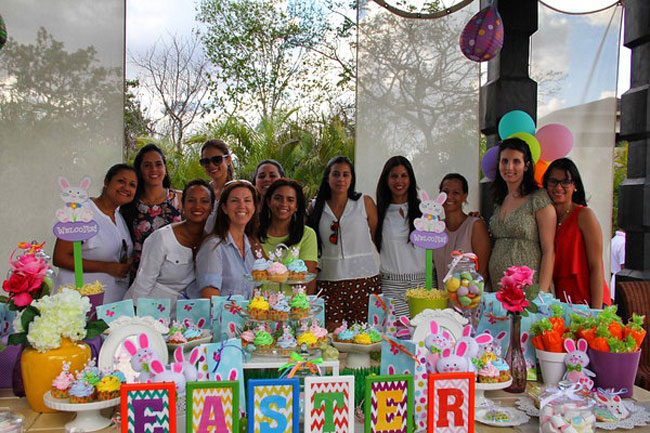 To celebrate the start of the school Easter holidays, and as something fun to do with the little ones, Julia Lutter, Sheila Gober and Rosalinda Bruderer decided to host an Easter Egg Hunt for their children and those of their classmates.

With what seemed like the entire kindergarten and first grade of the Abraham Lincoln School… the scene was both chaotic and cute.

The 3 ladies went above and beyond to create a magical Easter themed celebration. With the help of Vielka Castillo who owns Party Town party supply store in La Romana, the villa of Herbert and Julia was transformed into an Easter Bunny paradise! Balloons floated in the breeze, easter bunny cookies and cupcakes waiting to be devoured and even easter-themed soda pops, not to mention the carrot shaped goodie bags. Meanwhile there was also ice-cream from Cinco and lots of delicious food prepared by Oberlyn Camacho.

As for entertainment, the little ones enjoyed having their faces painted and dressing up in bunny ears, while other amused themselves on the trampoline, and some (including the boys) had endless fun driving the barbie-pink car round and round the swimming pool.

The grand finale however was the Easter Egg Hunt. With the group divided into “chiquitines” and less small ones, Julia did a sterling job keeping the older ones amused singing their ABCs, while minis were given little head start… But it wasn’t long before they were all tearing up the garden in pursuit of the Easter eggs, and by “all” we actually mean more than we’d anticipated as the nannies and even the moms got in on the action. “In the future the niñeras should not be allowed to take part” joked Julia Lutter.

Nevertheless it was a fun way to start the Easter holiday celebrations!!

The following collection of images were taken during the event: