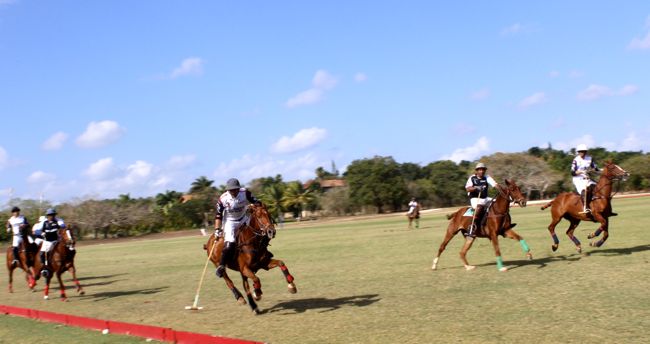 This Saturday March 28th was the day 3 of the Casa de Campo Copa Semana Santa polo tournament, and with just 2 more days to play, the competition really started to heat up.

Once again out in force to support the game and enjoy a fun afternoon in the sunshine were the “tailgaters”, with picnics, champagne and beer-a-plenty it was the perfect atmosphere to enjoy an afternoon of exciting polo.

Here we bring you the low-down on the days games as written by Casa de Campo Director of Polo, Calixto García-Vélez:

Day three in of the Semana Santa Polo Cup continued to provide tailgaters with fast high level competition as locals Marat Legal Lopera faced off in the first match against a powerful Lechuza CTE team. La Lopera hung tough in the first three chukkers keeping the match even and providing their supporters with the hope that they could secure their first win. However it was not to be as Ignacio Del Tour and Matias Bocha took control of the match exerting pressure on the Marat Legal Lopera players forcing them into costly mistakes which allowed Alfredo Vargas and Huascar Brenes free runs to goal. In any polo match ponies are 80% of the game and in the second half of this match this was definitely the case.

Lechuza CTE literally ran away with the match as their superior pony power powered them to a 12-6 win virtually eliminating La Lopera from contention and establishing themselves as the team to beat.

The second match of the day proved to be a battle to the last bell.  An undefeated La Garcia team faced off against a very balanced Hola team. This match went back and forth as neither team could pull away from the other. The Garcia brothers continued to terrorize the opposition with their aggressive play as Santiago Losa combined beautifully with local pro Heriberto Constanza to score some impressive goals. Enrique Zorilla seemed to be everywhere for the Hola team as he continually rallied his teammates around him answering every La Garcia score with one of his own. In the end it was anyone’s game as La Garcia had a one goal lead the last two minutes of the match with Hola narrowly missing several shots on goal to tie the match. As the 30 second bell sounded Hola had a chance for one more chance to tie but an unlucky bounce ended their chances and putting them in a precarious position to miss the final.

La Garcia takes a narrow 7-6 win and only needs one more victory to secure their spot in the finals this Saturday April 4th.

DRESS CODE: Whimsical Chic with a Touch of Polo
For the ladies think maxi dresses, wedges or flats, wide-brimmed hats, funky sunglasses and statement jewellery. For the gentlemen we’re talking shirts and slacks, and for the most stylish- light jackets and even bow ties.

11am: CasaLife / Stella Artois red carpet opening
Come strut your stuff and show off your #PoloStyle on the red carpet.

11am-2pm: Complimentary pony rides for the little ones!
You bring your little ones. we bring the ponies – fun for all the family!

12pm-2pm: A toast with Stella Artois
As one of the event sponsors, Stella Artois will be offering a round of complimentary Stellas to the first 200 people, who also get a Stella Artois Chalice to take home with them.

2pm: Low goal final
The two finalists of the low goal competition will compete to be crowned the low goal champions of the Casa de Campo Copa Semana Santa.

3pm: Divot Stomping with Veuve Clicquot
All spectators are encouraged to converge on the field to stomp down the turf that has been torn up by the pony’s hooves… Everyone taking part in this fun activity will get a complimentary glass of champagne from Veuve Clicquot.

3:30pm: Paso Fino show by ADOPASO
ADOPASO, the Dominican Association of Paso Fino Horse Breeders, will be coming to Casa de Campo especially for this event, and will be bringing some of their finest Paso Finos and riders to showcase the elegance and beauty of these incredible horses.

4:30pm: High goal final
The two finalists of the high goal competition will compete to be crowned the high goal champions of the Casa de Campo Copa Semana Santa.

Just check out our video for a glimpse of what’s to come: