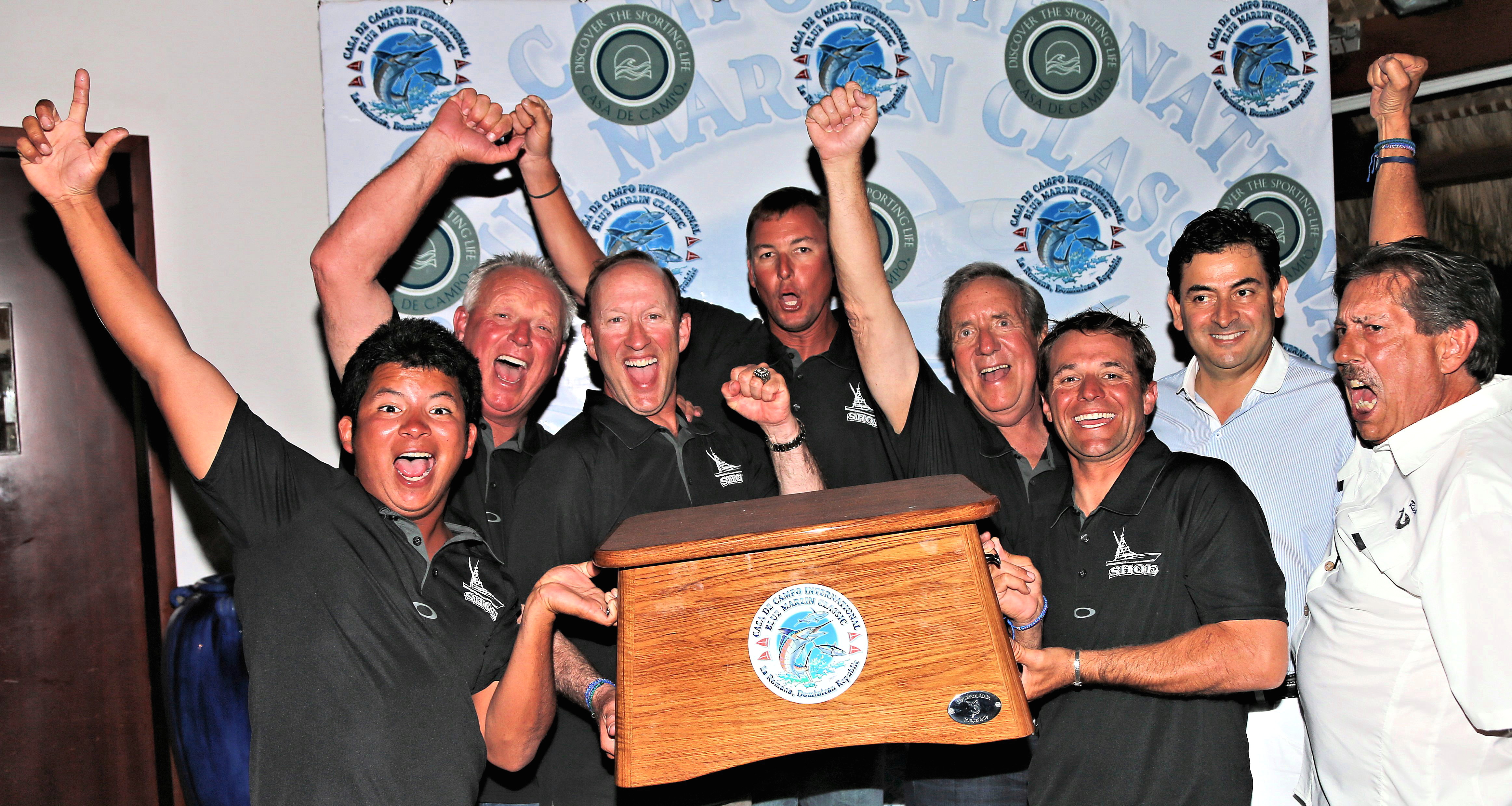 It was the team from Florida aboard the 62’ Spencer Shoe who finished at the top of the leader board on the third and final day of this year’s Casa de Campo International Blue Marlin Classic tournament, taking home a fortune in cash and luxury prizes.

Unusually strong currents greeted the tournament fleet on day one as they headed out to the fishing grounds off of Casa de Campo’s luxurious marina. At 9:22 am Blue Heaven broke the ice with the tournament’s first blue. That afternoon of the first day a battle ensued which was to continue until the final minutes of the final day between North Carolina’s Contango and Miami based Betsy with both boats releasing a pair of blue marlin. At lines out Contango held on to take the daily releasing their second blue ahead of Betsy.

Day two dawned much the same as the first with currents so strong that many of the boats reported that a number of the local artisanal fleet’s FADs (Floating Aggregate Devices) were being pulled under the surface by the churning tides and could not be seen while others had disintegrated and scattered. A new battle broke out this day between Betsy and Shoe, releasing three blues a piece with the latter taking the daily by virtue of bonus points earned for releases registered on 30-pound-test line under tournament rules. Contango remained in the hunt with the release of a blue. That evening everyone feasted at the ‘Fiesta Latina’ in Altos de Chavon to the sounds of salsa and merengue with delicious tapas including Spanish Serrano Pata Negra Ham courtesy of event sponsors Gastropolis, plus cocktails by Bermudez Rum and Dewar’s 12 Year Old Scotch.

The next day was the Lay-Day in which activities included a Sporting Clays competition when 18 participants tested their shooting skills, and the First Annual CDC Donkey Polo Match where everyone had an awesome time while some contestants fell off their donkeys playing this hilariously grueling sport! In the evening the Play for the Kids Gaming Night was held at the Casa de Campo Yacht Club to generate funds for the tournament’s favorite charity, Hogar del Niño.

Once again that third and final day began the same as the previous two days of fishing while the stage was set for what was to be an exciting down to the wire finish. Shoe immediately proceeded to get things started by releasing the first blue of the day and added a second one in the early afternoon pulling ahead of Betsy due to the 30-pound-test bonus points while Contango gave chase by releasing two blues of their own catching up to the leader but unable to pass them thus moving only into second place based on time at lines out. Betsy finished third with no fish on the last day.

When it was all said and done, the 17 boat tournament fleet had released a very respectable 40 blue marlin in the three days. Shoe’s owner Don Schumacher commented, “Hard work and attention to details by everyone on the team is what accomplished the win for us”. My Captain Devin Silas worked very hard to get us on fish and that was the reason for our win”. Additionally, 6 white marlin and 2 spearfish were released and although these did not score points in the tournament, the Blue Marlin Classic was the first leg of the Dominican Triple-Header tournament series and they did count towards series points. Contango is holding the lead after leg one in the series.

In the Individual angler standings Betsy’s owner, Mike Brauser was the tournament’s top angler with five blues earning him the Mustad Silver Hook Trophy. His captain, Tim Popfinger explained, “Great tournament. Mike caught all 5 blue marlin. We would have won if we fished 30 line test, but we chose 50. Our game plan was to catch more fish quickly. The last day we didn’t see anything, so it didn’t turn out exactly as planned. A lot of anxiety that last day. It was tough”. In second place was Miss Magnolia angler Geno Savers with three blues edging out on time Shoe’s Kenny Krumins who also had three and they too received Mustad Silver Hook trophies. Top Lady Angler was Dominican Patricia Ranik aboard Tomahawk.

Dates are already set for next year from April 13th to 17th. Mark your calendars!

The following collection of photos were taken by Alejandro Heredia at the prize-giving ceremony of Casa de Campo Blue Marlin Classic: