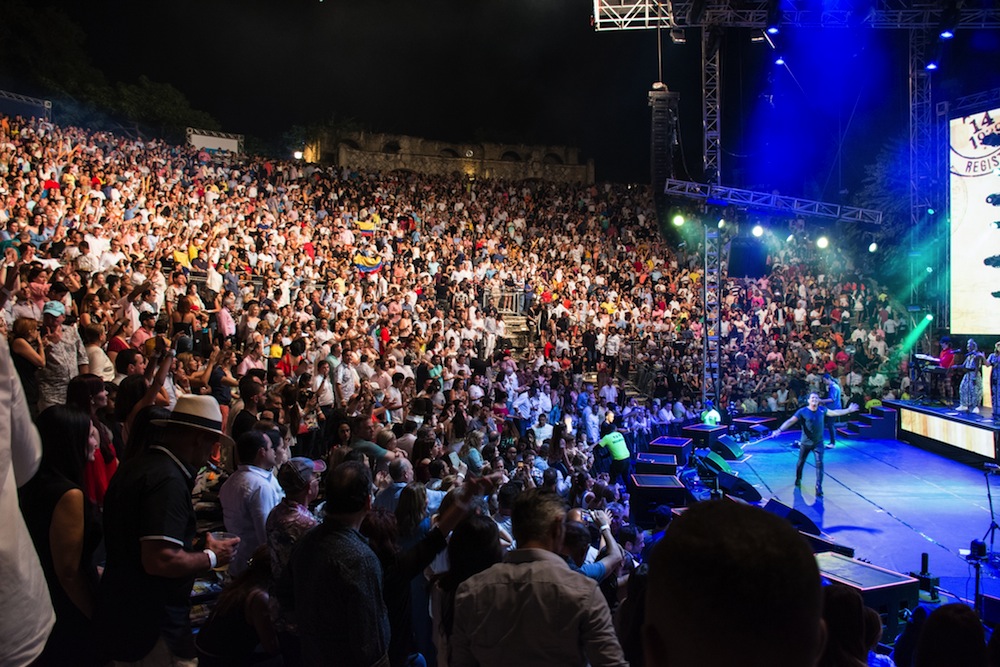 Following a very exciting visit to the Fundación MIR on Friday, Carlos Vives and his group rehearsed on Saturday afternoon to later that night bring a full crowd to the Altos de Chavón amphitheater. 18 years ago Carlos Vives visited the Dominican Republic in support of those affected by hurricane George, and returned last Saturday for his first concert in Casa de Campo with a bang! 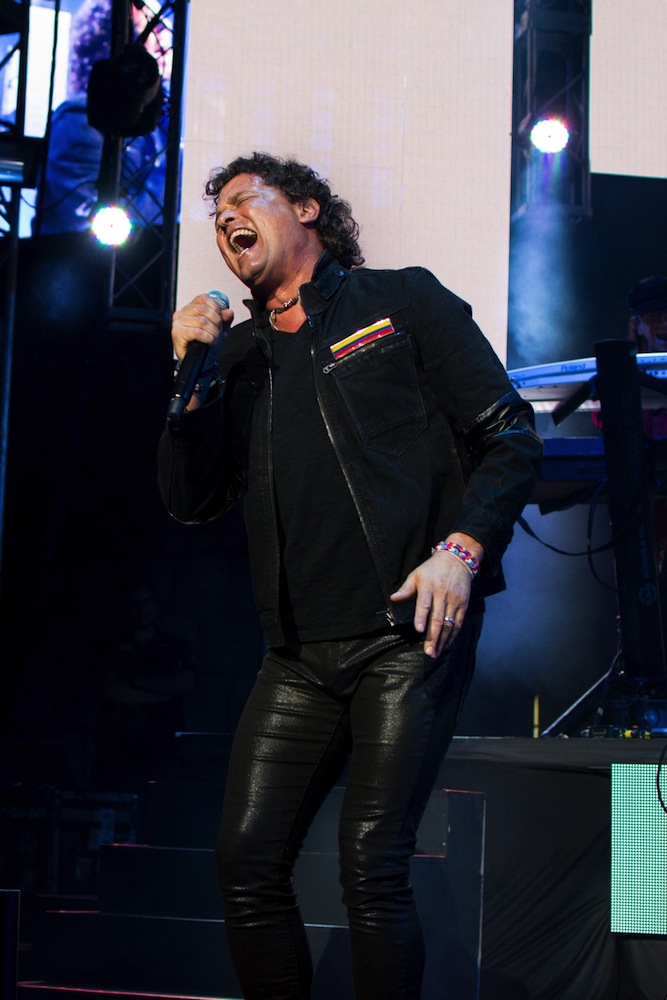 As guests eagerly awaited the start of the performance and filed into the 5,000 seat amphitheater, a DJ played to pump up the crowd. Around 9 pm the entire  area was full (confirming the concert was sold out!!), and the lights dimmed while Carlos Vives’ musicians took to the stage. Carlos Vives himself entered wearing all black and a jacket with “Vives” written on the back, along with the Columbian flag over his left chest pocket. He began by singing “Ella” and immediately had the reaction of everyone standing up to sing.

For two hours, Carlos entertained the crowd with his all time classic hits and even played with soccer balls that he later tossed to the audience as gifts. His songs included “Pa’ Mayté”, “La gota fría” (where he donned his own silver embellished guitar!), “El amor de mi tierra”, “Tu amor eterno”, “La tierra del olvido”, “El mar de tus ojos”, “La foto de los dos”, “Dejame entrar”, “Fruta fresca”, “Ella es mi fiesta”, “Bailar contigo”, “Carito” and “Nota de amor”. Once he started singing, “Volver a nacer” which most of us know as “Quiero casarme contigo” he invited a couple on stage where the crowd witnessed a marriage proposal! Another very special moment occurred when when he sang, “Quiero verte sonreír,” that he dedicated to Lian Fanjul de Azqueta and the children of Fundación MIR as a video of his visit to the school played out on the big screen.

His energy was contagious; he even said that concerts and parties are exactly for that – to dance, sing and enjoy life to the fullest! Recent hit songs like, “Nota de amor” and “El mar de tus ojos,” were also a big hit, the last one featuring the talented Columbian group, ChocQuibTown via video. 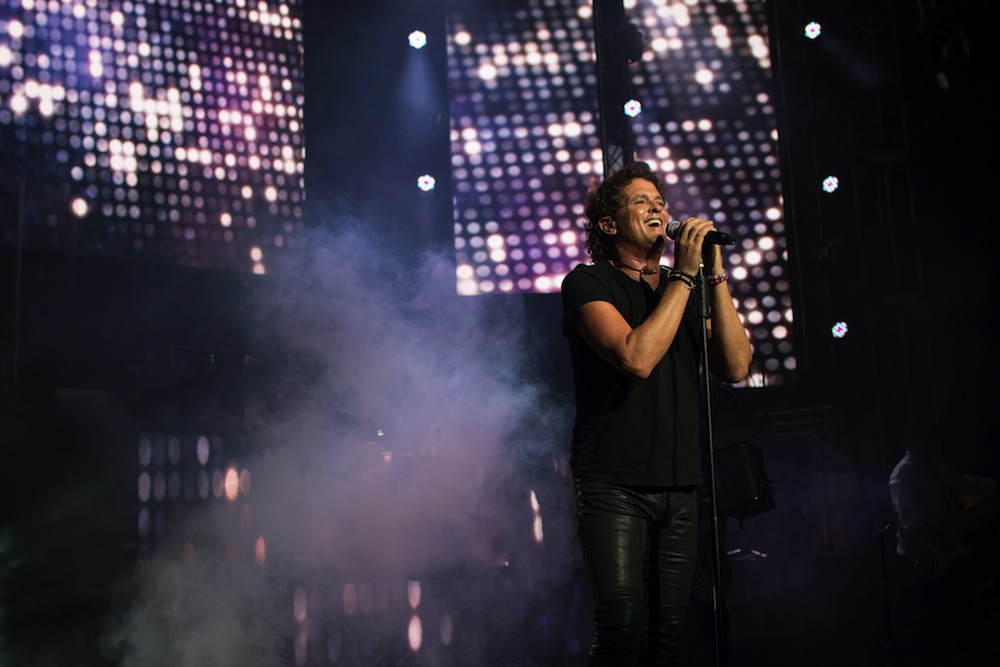 Carlos Vives closed this concert party with the song that has been dubbed the “song of the summer” – “La bicicleta.” The theatrical composer came out riding on a black bicycle around the stage, which he, on occasion put down to come to the front of the stage and greet audience members and take selfies with those closest to the stage. On Sunday, Carlos again thanked everyone who went to the concert on his Instagram page with a sweet message that read: “Thanks to my Dominican brothers for this incredible return and your generosity with your applauses.” The Colombian performance Carlos Vives presented was exactly what he had promised with his tour name, “La Fiesta de Todos.” This concert was definitely a party for all, and a great close to Casa de Campo’s summer concert lineup!! 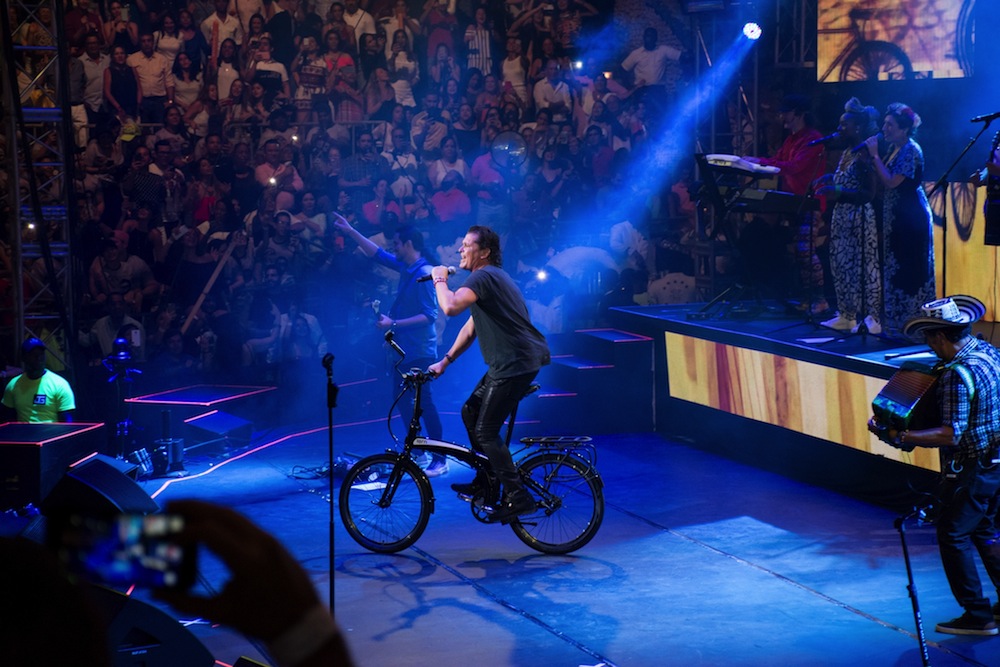 The following pictures were taken by Alejandro Heredia on Saturday, September 17th during the Carlos Vives concert:

And by Mairobi Herrera on Saturday, September 17th during the Carlos Vives concert: