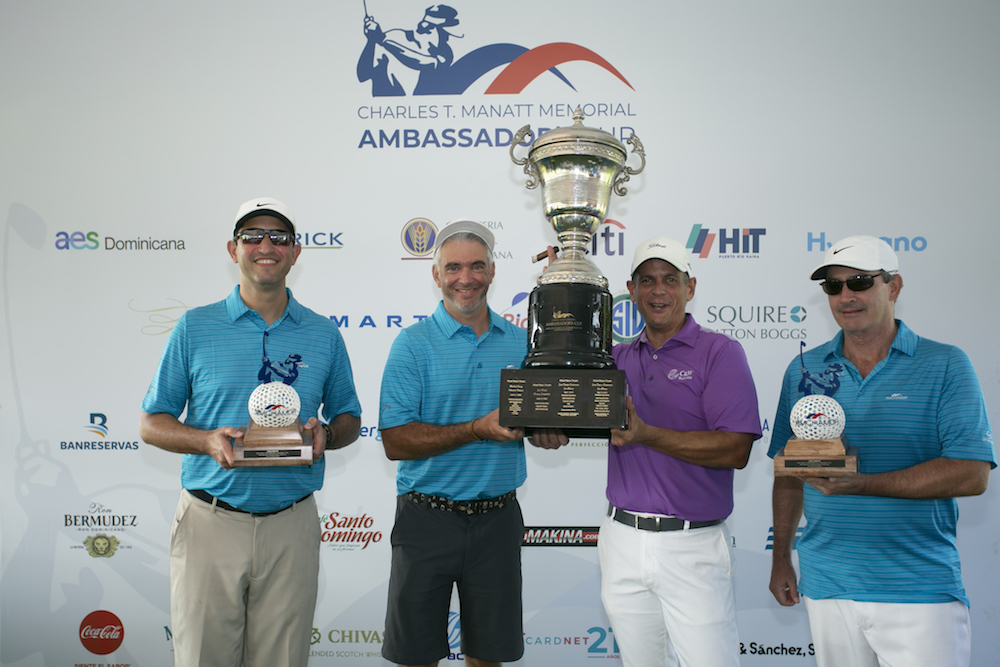 Last Saturday, October 30th, the 21st edition of the “Charles T. Manatt Ambassador’s Cup” golf tournament organized by the American Chamber of Commerce (AMCHAMDR) was played in Casa de Campo’s most famous golf course, the Teeth of the Dog where in the end the players, Carlos López Cornielle and Juan Marcos Yunén were crowned this year’s gross winners.

The tournament was held in categories A, B, and C from the early hours of the morning. After the notes of the national anthem, Roberto Herrera, president of AMCHAMDR, highlighted that the Charles Manatt Memorial Ambassador’s Cup 2021 has within its essence the integration and strengthening of relationships and linking it to the mission that AMCHAMDR has and its work to strengthen commercial ties and maintaining a favorable business climate between the Dominican Republic and the United States.

The day started with Bill Swaney, Deputy Chief of Mission of the United States Embassy in the Dominican Republic, having the honor of teeing off the contest at 9 am.  The tournament was marked by an atmosphere of integration and healthy sports competition, and by 3:00 pm the players had completed the 18 holes of the course.

Andrés Bobadilla and Juan Ramón Portela won first place net in category A for a final result of 65 clubs. The second net place in the same category corresponded to Víctor de la Cruz and David de Los Santos with 66 hits and the net third place was awarded to Luis Mejía and Guillermo Sicard, with 68 net sticks.

In category B, the net first-place winners were golfers Irvin Durán and Henrique González with 62 strokes. In second place net, with 64 strokes, Gianmaria Caruso and Frixo Messina, followed by Mickey Flaquer and Alberto González with 66 strokes in third place net.

In category C, George O’Reilly and Rafael Hidalgo reached first place for a total of 66 net strokes. These were followed by Carlos Jiménez and Henry Mora with 68 strokes in second place, and Juan Gilberto Garza and Miguel Ángel Fernández in the third position in the category with 69 strokes, after a tiebreaker per card.

Among the special awards, the winners were Juan Marcos Yunén in “Longest Drive” and Fernando Villanueva in “Closest to the pin”.

The award ceremony took place at the Driving Range in Casa de Campo, where there was also a lunch attended by players and guests. Before the event ended, William Malamud, AMCHAMDR Executive Vice President, offered a few words of thanks to the players and related parties present. Malamud stressed that the tournament is a symbol of fellowship to promote a reunion and strengthen relations within the members of the American Chamber of Commerce, following the physical distancing marked by the COVID-19 pandemic.

The American Chamber of Commerce of the Dominican Republic is a non-profit organization that seeks to strengthen the development of trade ties between both countries through the strengthening of free enterprise, investment promotion, community service, improving government relations and international and service to its members.

Founded on November 8, 1923 it has a membership of more than 2,700 businesses and professional firms in Santo Domingo and nine provincial offices.