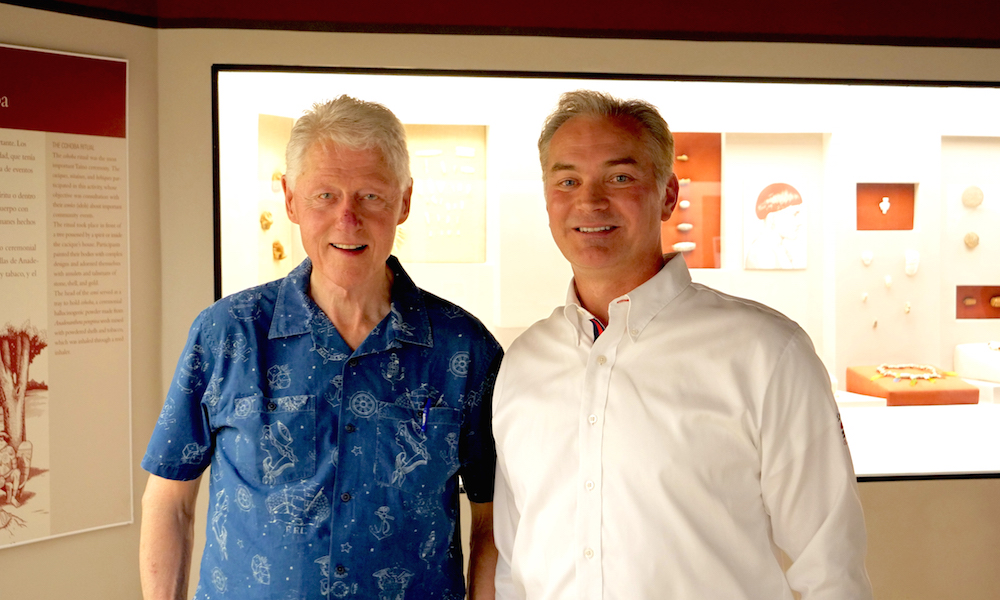 Clinton who was accompanied by Jason Kycek Senior Vice President of Sales and Marketing at the Casa de Campo Resort and Rolando González Bunster, Entrepreneur and CEO of InterEnergy who hosted his visit to Casa de Campo.

During his visit, he shared with the classic artisan’s vendors who represent through their work, the Dominican culture, bought souvenirs for his wife, daughter, grandson and office companions and finally danced to the rhythm of a “perico ripiao”, a typical dance national.

The former US president arrived at Casa de Campo Resort on Thursday and was welcomed by the president of Casa de Campo, Andrés Pichardo Rosenberg, as they talked he recalled some his previous visits on several occasions in the last 20 years. After his arrival, he played a game of golf in the well-known course of the resort, in the company of his friend and villa owner Rolando González Bunster, Roberto Herrera and Bob Mancini. At nightfall, he enjoyed a dinner at the SBG restaurant in the Casa de Campo Marina, where he agreed to greet and take selfies with the attendees.

It is no secret that Bill Clinton loves Casa de Campo Resort and its golf courses. In all the visits he enjoys playing a round of golf in the field Teeth of the Dog, one of his favorite courses, as he has indicated. Definitely, Casa de Campo is the favorite place for celebrities to spend their vacations.

Below a gallery of photos taken during the visit of the ex-president of the United States Bill Clinton: