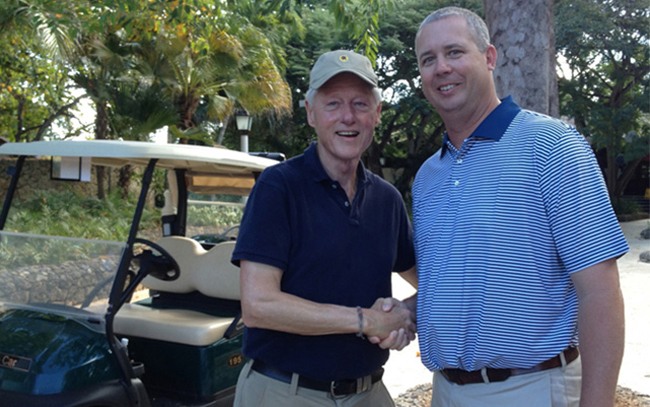 Everyone loves celebrity spotting, and nowhere is it more easy than in Casa de Campo… Although of course with so many celebrity visitors we do tend to be a little blasé about it, but when Bill Clinton recently went out for dinner in the Marina Casa de Campo that did cause a bit of a stir!

Arriving in Casa de Campo a few days after New Year’s Eve, former president of the United States, Bill Clinton and his wife, Hilary Clinton were spotted eating out at Limoncello in the Marina Casa de Campo, where they were joined by the Fanjul and the Gonzalez-Bunster families. And while yes the Casa de Campo community is in general pretty laid back about celebrity spotting, seeing Mr Bill Clinton casually having dinner out in the open, in the middle of the Plaza Portofino of the Marina Casa de Campo – now that did cause some excitement – the result being that he kindly agreed to pose for few photos.

The Teeth of the Dog, designed by Pete Dye and opened in 1971 is now ranked as the Caribbean’s #1 golf course and #22 worldwide – and is according to Casa de Campo Golf Director, Gilles Gagnon, one of former President Bill Clinton’s “favorite golf courses in the world”. With no less than 7 holes dramatically skirting along the Caribbean ocean – what’s not to love!? He “loves the Teeth” says Gilles Gagnon.