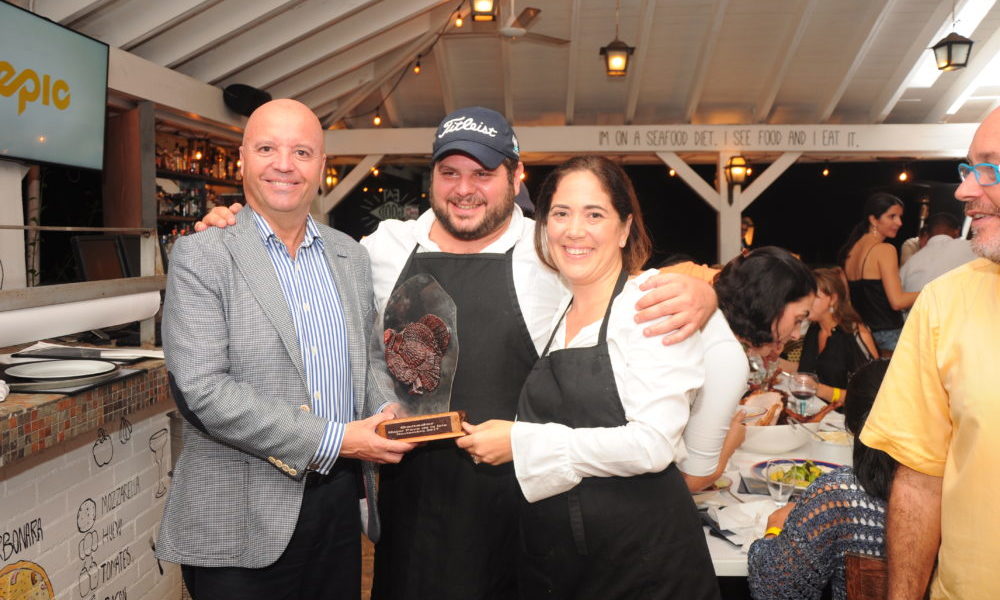 Thanksgiving isn’t complete without some turkey! Casa de Campo community members got a head start this year on the holiday and preparations with a Best Turkey Competition. Everyone thinks they make the best turkey, so naturally, our fun loving community put them to the test! Despite the rainy weather, residents came to Altos de Chavón last Thursday night for the sold-out competition they had been chatting about for weeks.

Set in the homey atmosphere of Café Marietta, tables were packed as friends gathered round eager to hear the results of the competition, judged by a panel of fine critics which included: Charles Keusters, Director of Food & Beverages in Casa de Campo, Massimo Careta, La Piazzetta’s Restaurant Manager, and the General Manager of Grand Bahia Principe La Romana, Jesús Duran Haro. They were quick to note which turkeys provided the most flavor, the savoriest sauce, and came with the biggest WOW factor. Café Marietta provided some stellar sides which included appetizing dressing, rice and salad. Plus, wine sponsors Alvarez & Sanchez kept drinks flowing throughout the night!

The event had the participation of chefs Magda Zeller, Amelia Pereyra, Loly Hazoury, Sarah Troncoso, Liliana Abel, and Micaela Tolentino. In the end, Sarah Troncoso was deemed the #1 champion and Amelia Pereyra awarded best presentation! Sarah said it’s thanks to her brother-in-law Mickey Heded they did so well. He came in as a savior helping her season and bake the turkey. The turkey was stuffed with wild rice, onions, cranberries, and bacon and baked at a low temperature for 4.5 hours. Her advise to making the best turkey? Add bacon to the top so the turkey continues basting while cooking. She says, “It’s the key to everything!”

All competitors were gifted with cool turkey awards, designed by none other than well-known Chavón artist Argenis Lebron, and 100% of the event’s proceeds benefitted the Hogar del Niño. A raffle at the end of the night was a surprise to attendees and had several lucky winners receiving hotel stays in Vail! Winter vacations just got a whole lot cooler with the Best Turkey Competition. Organizers of the event say they’re looking forward to making next year’s bigger and better; “It was a great turn out and a beautiful and happy event for a great cause in the spirit of Thanksgiving. We look forward to making it an annual event.”

We hope everyone has a blessed holiday today and enjoys more turkey with their families. Congratulations to the organizers for starting a cool new tradition, the participants for whipping up a delicious feast, and attendees for supporting their fellow neighbors and the children of La Romana. We’re lucky to be part of such a great community. Read more on what Casa de Campo residents say they’re thankful for this year.

View more photos from the Best Turkey Competition taken on Thursday, November 16th and provided by the Hogar del Niño: