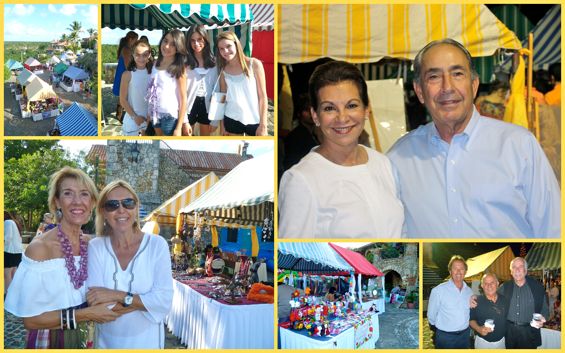 Last Saturday and Sunday the 18th and 19th of December, Altos de Chavón came alive with the spirit of Christmas during the Bazaar Navideño – a 2 day Christmas market with last minute holiday shopping bargains, fun games and activities for kids and culminating with a spectacular Christmas Tree Lighting Ceremony.

The Bazaar Navideño officially opened on Saturday at 2pm with more than 50 tables in colorful striped tents selling a variety of different products, gifts, foods and other treats as well as a small art exhibit by local artist Fatima Renedo.

With three different ‘inflatable adventure games’ or ‘juegos inflables‘ the Bazaar Navideño was the perfect place for families to spend the day – whilst the children bounced, slipped, slided and climbed on the games their parents were happy to enjoy the festive atmosphere, shop, enjoy a bite to eat and relax in the sunshine.

Both evenings during the Bazaar Navideño, the children and their families were thrilled by a visit from Santa Claus, who made his merry way around the Bazaar, greeting the children, listening to their ‘Christmas wish lists’, giving our sack loads of hugs and having his photo taken at every turn.  And whilst the children of the Bazaar were clamouring after Santa asking for new bikes and dolls, the fathers of the children were (understandably) rather distracted by Santa’s sexy helpers….

Rodrigo Caceres and Ivonna Sosa with Santa and his Santitas Sexy!

After 2 days of festive fun at the Bazaar Navideño the grand finale of the weekend was the Christmas Tree Lighting Ceremony, which was led by Dr Claudio Silvestri president & CEO of Premier Resorts & Hotels, the management company for Casa de Campo – who together with the mistress of ceremonies pushed the grand button and illuminated Altos de Chavón and the spectacular animated Christmas tree in a burst of fireworks!