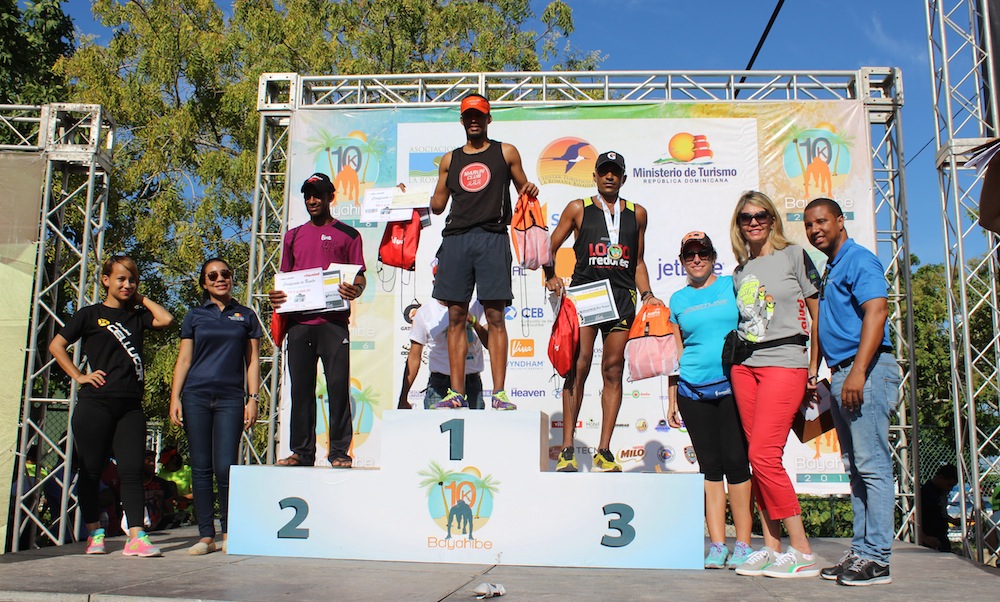 Last Sunday September 18th, the 4th edition of the Bayahibe 10k organized by the Romana Bayahibe Hotel Association and Tourism Cluster was a complete success with the participation of both locals and visitors. This year, a congratulations is in order for Pedro Herrera and Jaisa Sánchez who won the overall first place titles!

500 runners arrived bright and early on Sunday morning at La Punta de Bayahibe to participate in this event and compete in the different categories. The race was scheduled to start at 7 a.m., and to warm up particpants had a zumba workout at 6:30 a.m. You could see runners of all ages at la Punta, even a 9 year old boy named Isaac Del Rosario Pinales who ran side by side adults and completed the race! Way to go, Isaac! At 7:40 a.m. Pedro Herrara crossed the finish line earning himself the Overall 1st place for men’s category and just 5 minutes later, Jaisa Sanchez arrived!!

Spectators gathered at various points along the route to cheer the runners on and to witness when each of runners reached the finish line. 2nd Overall Male went to Mario Enrique Doroteo, while 2nd Overall Female was won by Jordan Diaz. Third Overall was won by Toribio Rosa Pichardo and Deyanira Díaz.

Each of the runners received Bayahibe 10K medals as they completed the route, and in addition to the great prizes for each of the winners – cash money fromRD $1,000 to RD $18,000, as well as cellphones, trips to Saona, and entrance tickets into the Casa de Campo Corre 2016; there were also great raffle prizes! Such as, flights to the U.S. with JetBlue, numerous weekend stays at hotels across the Dominican Republic, dinner at a variety restaurants, and many more!!

Ana Garcia-Sotoca, Executive Director of the La Romana – Bayahibe Tourism Cluster, thanked everybody for their continued support of this event, “We can once more say that the 10K Bayahibe was a success, and has already become one of the most anticipated races of the eastern region. We had the participation of 500 runners, who enjoyed a route with unmatched sights, by the sea.”

The race looks to promote sports in an idyllic environment like Bayahibe and we know they are succeeding! Hope to see you in next year’s edition! See the video from the Bayahibe 10K 2016, courtesy of Explore La Romana: