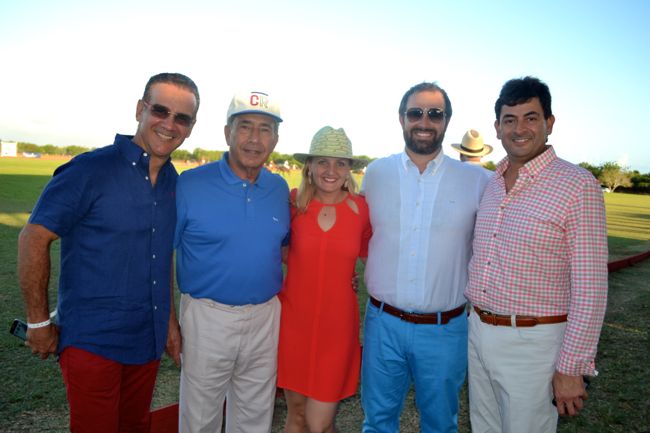 For the first time presented by Casa de Campo’s exclusive resort and resident magazine, CasaLife, a crowd of more than 1200 gathered to enjoy the excitement.

Spectators in the VIP enclosure by CasaLife magazine

As the Dominican Republic’s leading luxury publication, it was with great pleasure that CasaLife magazine was able to host special guests in the VIP Enclosure, a new edition to the tournaments spectator area. These special invited guests and players enjoyed drinks sponsored by La Enoteca with Moët & Chandon and Belvedere, Chivas Regal 18 and Stella Artois, as well as delicious picadera prepared by Crema in La Romana. An edgy mix of decor with art furniture from Elementos 3R in La Romana, as well as the unique design-concept chairs of Flux, combined with the elevated location, afforded a privileged viewpoint for enjoying the action. Meanwhile, Rústicos y Más, creators of fine bespoke Dominican furniture provided a chic seating area for the general public.

The afternoon started with the finals of the Bajo division, played out between the Azimut team and the Casa de Campo team, which at the end of a 6 heated chukkers concluded in victory for Azimut led by Casa de Campo’s own Calixto Garcia-Velez. [Full recount of the action written by Cali himself will be published soon.]

Following that, it was time for the crowd to get in on the action with a donkey polo tournament organized by Casa de Campo Real Estate. With the little ones inspired by the thundering action of the ponies, they flooded onto the field, and with brooms, beach balls and somewhat reluctant donkeys, a slightly less elegant game of polo was played out – much to the delight of the crowd.

And then came time for El Pitirri to go head to head with La Chamuscada in the finals of the Alto division. Dr. José López, the afternoons commentator, stepped out onto the field with Alfy Fanjul, who threw in the ball to start the first chukker… And so the action began as the young Julio Lopez of El Pitirri made a charge for the ball.

From there, La Chamuscada took an early lead which they maintained and continued to lengthen as play progressed into the 6th and final chukker. At which point disaster struck when the pony of Julio Lopez took a nasty tumble and the young polo star was sped off the pitch to the Centro Medico hospital with a collar bone injury. After that, it wasn’t long before the final whistle was blown and La Chamuscada were declared the champions of the 10th annual Casa de Campo Copa Semana Santa polo tournament presented by CasaLife.

But the good times didn’t end there… As the gorgeous DJ Gem upped the tempo and got everyone dancing through sunset to the prize giving ceremony.As the official host of the gathering, Philip Silvestri, took the opportunity to say a few words, while joining him on stage was Rebecca Hughes, editor of CasaLife magazine, Calixto Garcia-Velez director of polo and manager of sports for the Sporting Life and Daniel Hernandez, general manager of the Casa de Campo hotel, who together gave out the trophies and a bottle of Royal Salute whiskey to the champions… Accompanied by the traditional spray of Moët Chandon champagne.

Thank you very much to each and every one of our sponsors as well as everyone who helped with the organization, we couldn’t have done it without you. And special thanks to Calixto Garcia-Velez, who took on the unenviable task of organizing all the teams and games.

Thank you CasaLife! We had a great time!