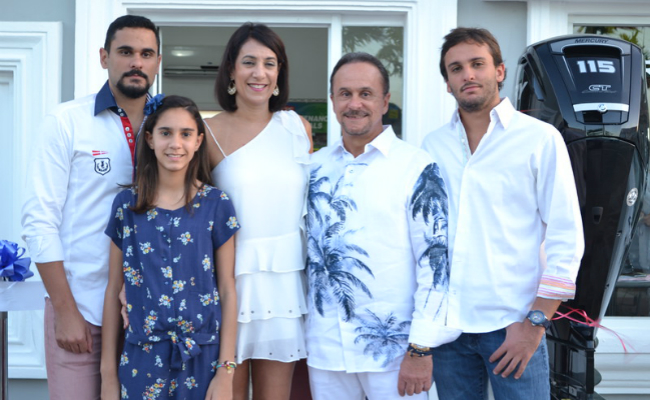 Automarina, which specializes in selling nautical products and services (repairs and maintenance of ships and boats); beach gear and everything needed for activities at sea, had an inaugural cocktail with live music on Thursday, February 4th, 2016 for its new establishment in La Marina Casa de Campo.

Its main store is located in Santo Domingo, in Los Próceres #2 Ave in front of Diamond Mall, and since its opening in 1981 by owner, Angel Andrés González it has been able to meet all the needs and demands of the marine industry and those who love the marine world.  It is considered to be the most complete nautical shop in the Dominican Republic and the Caribbean.

The opening words were given by Ginna Peña, Mr. Gonzalez wife, who welcomed everybody and introduced her husband. Mr. Angel Andrés González was visibly overwhelmed and emotional when talking about his plans to continue to expand throughout the country and thanked Frank Gonzalvo Director of La Marina Casa de Campo and Inversiones Bastillas by Mauro Caslini, for their support.

“This is the result of perseverance, hard work, honesty and support of those who believed that we could.”

Congratulations to Mr. Angel Andrés González and his family for the opening of their second store!

We are sure the Casa de Campo community will welcome and support you, wishing you much success in this new venture.