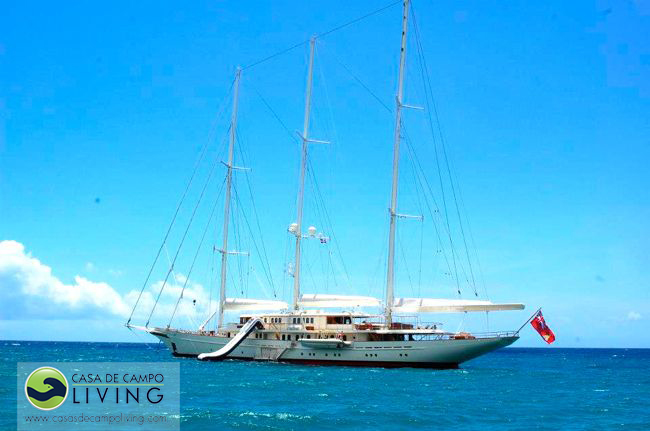 The magnificent 295ft sailing yacht “Athena” for sale for US$95 million, is quiet possibly the most beautiful sailing yacht every to visit the Marina Casa de Campo resort! What a beauty!

At 295ft / 90 meters long, Athena is considered the largest private sailing yacht in the world – and is also one of the largest sailing yachts every to be built. A modern yacht with the styling of a classic sailer this beautiful sailing yacht and technological wonder sleep 10 guests and boasts a media lounge, diving facilities with a decompression chamber, a variety of water toys such as wakeboards, kite-surfing equipment, a range of scuba diving gear and a waterslide, as well as a galley (kitchen) decked out like a 5-star restaurant!

We first spotted the Athena on a gloriously sunny day as she sailed along the Casa de Campo coast past the Teeth of the Dog golf course – looking so spectacular we weren’t sure if w were seeing a mirage or a pirate ship!

Sailing yacht Athena as seen from the Teeth of the Dog, Casa de Campo

About Athena – the largest private sailing yacht in the world

Athena is a clipper-bowed three masted gaff rigged schooner, which was built by Dutch shipyard Royal Huisman in 2004 for Internet entrepreneur James H. Clark. She was also the winner of the Show Boats International Award for Best Sailing Yacht over 40 Meters for 2004.

Athena is on sale with an asking price of US$95 million – the listing can be viewed at: www.superyachts.com

Athena also has her own 204 page coffee table book! “Athena – A Classic Schooner For Modern Times”  with photography by Louie Psihoyos and written by Jack Somer, describes the history, the construction and the life of this vessel

A few other megayachts we’ve spotted in the Marina Casa de Campo are:

MY GIRL”, a 165ft luxury motor yacht, captained by Jeffrey Cranshaw, arrived into the Marina Casa de Campo on the 26th of March 2013 and is expected to stay for 1 or 2 months. During their stay the owners are no doubt planning on enjoying a few days trips to Palmilla and Catalina Island, as well as taking full advantage of everything Casa de Campo’s “The Sporting Life” has to offer; tennis, equestrian, shooting and of course golf!

On Saturday and Sunday the 31st of March and the 1st of April, Casa de Campo villa owners and visitors were treated to the magnificent sight of a very impressive megayacht, “Le Grande Bleu” docked directly opposite Casa de Campo’s Minitas Beach and just off the coast of the exclusive Punta Minitas neighborhood. It’s all glamor and fame here in Casa de Campo!

The “Vibrant Curiosity” – at 280ft is the 3rd longest yacht to ever visit the Marina Casa de Campo.

The magnificent “Mirabella V” is a sloop-rigged super yacht, which was completed and launched in 2003 for Joseph Vittoria, former chairman and CEO of AVIS rental car company, at a cost of more than US$50 million dollars.

The ‘A’ is owned by 38 year old Russian billionaire Andrei Melnichenko, was designed by Phillipe Starke, is 394feet and cost 200 million dollars to build!