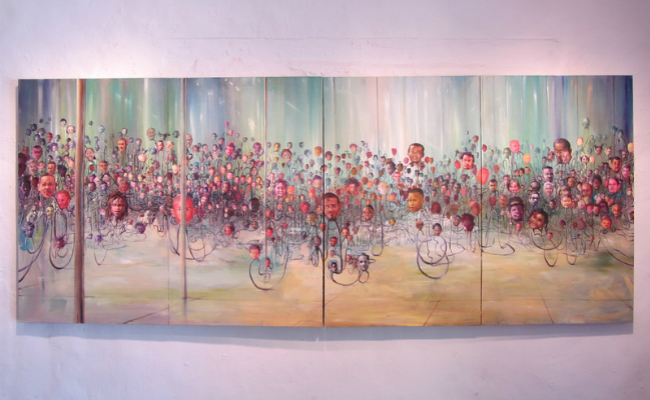 The Gallery in Altos de Chavón announces the opening of the “Artist in Residence, Fall 2015” exhibition under the Fundación Centro Cultural Altos de Chavón, which will be officially inaugurated with an opening cocktail at The Gallery this Thursday, November 19th at 6pm, with the artists, Alma Peguero, Thomas Pichardo and Luis Valverde.

In 2009, she graduated from the Parsons School of Design, studying with a scholarship for her work in Fine Arts and Illustration at the Altos de Chavón School of Design. That same year she completed her studies in the science of yoga, and since, has been passionately dedicated to teaching yoga and art, and seeking a way to convey union and raise human consciousness.

Graduated in 2008 from Digital Design and from Fine Arts/Illustration in 2007, he was then accepted into the communications research center in Fabrica, in Treviso, Italy, which has a highly competitive study and work program, founded by Benetton in 1994. He was chosen to be published in the Pictoplasma Animation Festival in Germany, which showcased only 250 illustrations from over 2,500 submitted. His animation of “Sudán del Sur” (South Sudan) was published in La Stampa and La Republica in Italy.

He graduated from the Altos de Chavón School of Design in the technical course of Communication Design, and then went to Argentina to complete his studies in Stop Motion, Motion Graphics and real time video manipulation or vjing. He is currently a partner in the Pixeleria where he acts as Art Director. Since 2014, he is Co-Director of the Communication Department.

The “Artists in Residence” program aims to promote educational and cultural exchange between Dominican and foreign artists who live and work in Altos de Chavon for three months. During this time they interact with their Dominican counterparts, exchanging experiences and ideas across disciplines. This dynamic exchange has made changes to the traditional way of working the materials or applying techniques in different art forms. The artists work on their projects in their own space and, at the end of their stay, participate in a group exhibition at the gallery. The exhibition will be open from Thursday, November 19th to Saturday, December 12th.