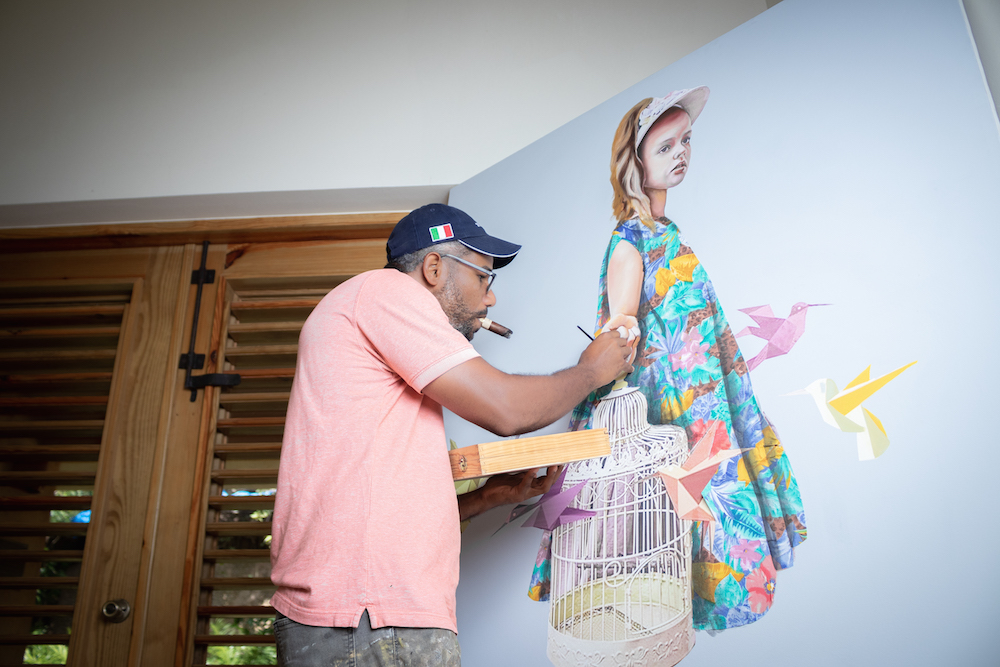 Living in Casa de Campo and Altos de Chavón, or as most like to call it the “Artists’ Village”, has given most of us the opportunity to get to know art in all its facets and forms. Through the years we have met very talented artists who work tirelessly for their dreams, as is the case of Argenis Lebrón.

His interest in art began at a very early age, but it was not until he reached the third grade that his teachers and family realized his potential. “My family has always supported me in everything that I have done, they were who used to buy me the art materials I needed to paint,” he tells us. After discovering his artistic abilities, he was always that student who was asked to draw the national symbols on commemorative dates, and in the seventh grade, he won a regional drawing Olympics.

As a teen, he met the Dominican artists Fermín Ceballos and José Pelletier with whom he talked about art and who taught him about great artists; they also motivated him to take art classes.  “I took my first formal art classes at the Pablo Claudio Musical Lyceum in San Cristobal. Two years later and on the recommendation of Pelletier, I enrolled in the National School of Fine Arts in Santo Domingo. It was during my time there that I immersed myself in the art world, I visited museums and galleries, it was one of the things I liked to do the most, it was really inspiring. In 2004 I won my first art contest at Casa de Teatro,” Argenis fondly recalls.

Years later, he met Yselsa Evangelista Nieto who spoke to him for the first time about the Chavón art school and introduced him to Angelo Valenzuela, a graduate, and professor at the Altos de Chavón School of Design. Thanks to Angelo’s recommendations and help, he prepared his portfolio and managed to enter Chavón School of Design in 2007 graduating in Fine Arts and Illustration in 2009 and Graphic Design in 2010. That same year, he was part of the Artists in Residence program in which he presented his work in the Altos de Chavón Gallery alongside Alexander Lumsden. “Chavón is an institution with top-notch teachers, a place where art is breathed, thought, and worked on all the time, whether in classes, doing homework, or in a lecture with renowned national and international artists. I feel that for every graduate there is a before and after Chavón, the school gives you a certain maturity as a person and an artist.”

At that time and on the recommendation of Mrs. Martha Victoria, the administrative director of Chavón School of Design, he began to give private art lessons in Casa de Campo, it was also when he met Mrs. Xiomara Menéndez Dajer who invited him to visit the Hogar del Niño; “On that first visit, I fell in love with this wonderful institution. I was an art volunteer for a while, and then I started to teach art. To this day I have no way of thanking Mami Martha, as I affectionately call her, Xiomarita and the Hogar del Niño for what they have done for me. They have, in one way or another, contributed to my career as an artist and as an art teacher. Thanks to them, many doors have opened for me, I have been able to achieve many goals that I had and help my family.”

Argenis enjoys working with oil on canvas and drawing or painting in black and white; he likes realistic drawings with a level of photographic detail but also minimalist abstracts, he is well known for his works that push the limits beyond what is being seen. “I like to make people stop to see them, feel intrigued, and try to give it their own interpretation.” Many artists tend to focus on a single artistic area; He likes the diversity that different media offers him when working on a piece for a client since he can bring to life any idea or request that they might have. He tells us that when starting to work on a new piece, he finds inspiration in the simplest things and that he likes to paint at night without distractions, listening to his favorite music, letting himself be carried away by the canvas in front of him, and any idea in his head. When asked if he has any favorite work, he tells us about ‘The girl Nacira with her ghost dog’ which he painted in 2006. The painting made in acrylic on canvas shows a girl with a mask over her mouth and nose and a cage next to her that housed her imaginary dog. As it is one of his favorite works, he gave it to his mother and it is in his parents’ house.

He currently lives in Altos de Chavón, where he also has his personal studio and if you are part of the Casa de Campo community or even the La Romana community, chances are you know or have heard of him. Argenis is often described as a friendly and joyful person, some might even say boisterous, who is kind to people and in his free time, you can find him enjoying a good cigar. He is also a tireless worker and firmly believes that in order to achieve goals and dreams, you must first be true to yourself and believe in what you do.

Among his future projects is to open an art gallery that offers opportunities and support to Dominican artists, as well as a workshop that can meet the needs of art enthusiasts, from a piece that covers a complete wall to the smallest ornament that adorns a desk, “That’s what I’m working on and focusing on now. I hope to be able to fulfill this long-awaited dream soon.”

* This article was previously published in our sister magazine Casa de Campo Living Spring 2021 Art edition. Thank you Argenis for chatting with us and Quennie Paniagua for the pictures. If you haven’t seen our print magazine yet, you can read the complete article and others in our online magazine by clicking here.