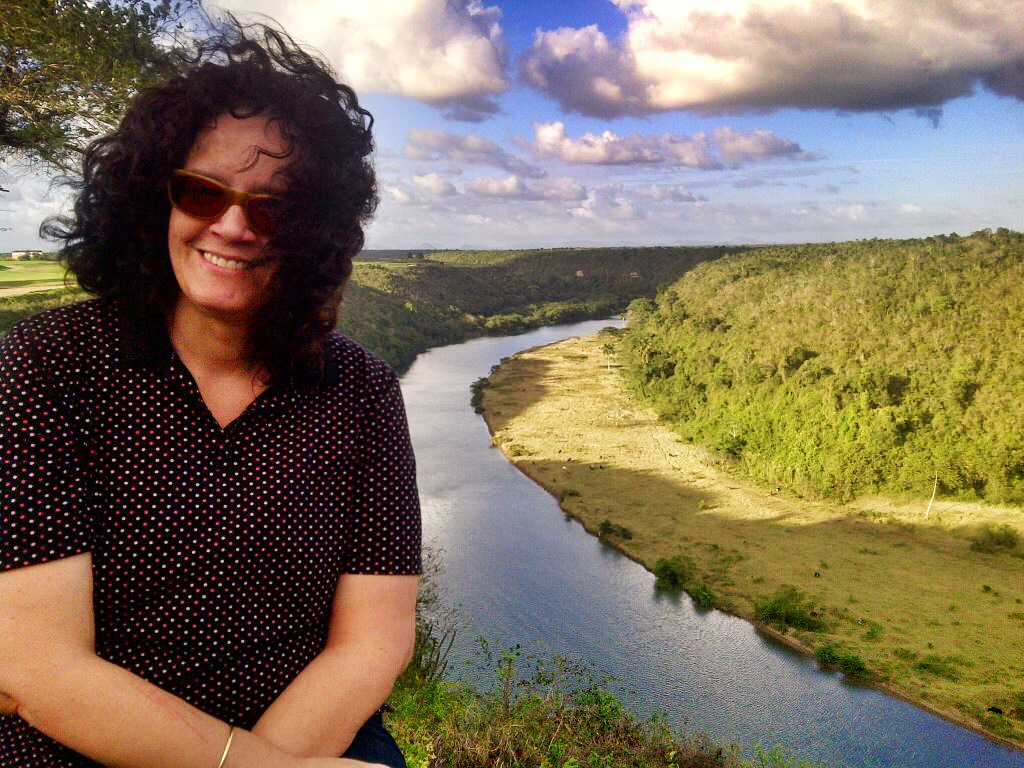 The Altos de Chavón Amphitheatre has, since its inception, been a modern-yet-rustic bastion for art and music, always presenting indomitable artists such as Carlos Santana, Sting and Frank Sinatra. Nowadays Ana Pereyra, a true “Romanense” (meaning someone born and raised in La Romana), manages this iconic venue, with a die-hard determination to maintain and improve this famous amphitheatre. We sat down with her for a chat on the past, present and future of this marvelous place.

I came into Casa de Campo covering someone else’s maternity leave. From there I worked in the Food and Beverages department, then I went to Entertainment, which then grew into the Department of Productions and Shows. That’s when Kandelá! began and was then moved to the Amphitheatre, and we began working and managing the venue.

@cdcliving: When did the amphitheatre first open?

The amphitheatre opened in ’82, but Kandelá! came here around ten years ago.

@cdcliving: Tell us about opening night, The Concert for the Americas.

I didn’t work here then, but I came as an audience member. I didn’t work at all actually, I hadn’t even finished school; I was in high school in 1982. But one thing’s for sure, I remember it all perfectly: I came with my family, and it was all an incredible experience. I would have loved to be working here then, but sadly, that wasn’t the case. But I enjoyed myself immensely, I remember I also went to the Santana and Heart concert, (which was two days later) and got the experience of being rained out, and all that…

@cdcliving: In all your years working at the amphitheater, which artist has remained particularly memorable in your mind, be it for any crazy thing they did, or for their actual show?

There are a lot of them. Personally, I consider it to be a privilege, to have been able to be so close to artists of the magnitude of say, Sting, who has always been my favorite, or Elton John, who is also a good example. Seeing Elton John right here at home was an impressive thing. Then after that, a lot of my favorites have been here, for instance I love Franco DeVita, and one of the concerts I’ve enjoyed most has been his. The first time he came, because he’s an artist that connects a lot to his crowd, and that type of artist, that type of concert, is the kind I personally enjoy most. Of course there was Plácido Domingo, who was incredible, Andrea Bocelli… it’s a privilege to be close to artists of that magnitude, after that you see them on TV and think “oh, but I had him right here at home.”

But when it comes to crazy things… Oh my! One artist that has always had the most requests – he’s come twice – is Luis Miguel. Luis Miguel is an artist that is famous for all of his extravagancies. I remember the first time he came, it was our first concert after we’d moved into the offices here at the Amphitheatre, and his security people blocked the doors to our office with boxes and equipment so that none of us could come out when he was doing his sound check. We had to tell them, “hey, you can’t lock us in the office, none of us want to see Luis Miguel, you can’t just lock us in here”… We had to fight a bit for that. Also when he’d go out onstage, nobody could look at him. Every technician, anyone in the hallway while he was coming out had to turn around so they wouldn’t see him. The last time he came, his people built a tunnel (that he didn’t use) of black cloth, so nobody could see him as he came out. He was always the most extravagant.

@cdcliving: What are your favorite memories of your time here in Altos de Chavón?

There’s a lot of memories, and my job is one within which I get to met all sorts of people, from all sorts of places, to meet talented people and be with them for around a week, to share experiences, and I love it. Every concert has its own memory, something special, but, for instance, I remember Santana in particular, because the second time he came here he did a press conference here at Altos de Chavón, and I remember clearly that a journalist asked him if he remembered the first time he’d come here, that it had rained and he hadn’t been able to sing, and he said of course, but that he had made a deal with Changó, which is one of the gods in the Cuban Santería, and that this time he would be allowed to. It really was a spectacular concert – looks like Changó let him. It was incredible, and, having lived through the first one under the rain and all that, to experience it again was wonderful, and I also got the chance to meet him and he’s a cool guy, very down-to-earth.

@cdcliving: In your opinion, how has Casa de Campo improved over time?

Oh, so much. It’s grown immensely, and I think that everything has become more efficient, it’s grown in the level of service it gives, even though Casa de Campo has always characterized itself for excellent service, but I believe that as time has gone by we’ve been refining that. The scope of opportunities we now offer for clients to enjoy their stay has grown incredibly.

@cdcliving: What does the future hold for the Altos de Chavón Amphitheatre?

We’re really working on providing new perspectives, thinking of integrating more shows with Dominican artists, and we’re seeing how we might go about achieving that. The amphitheatre is a place that not only has the privilege of counting with the presence of international artists, but also that strives, and this has been in mind from the beginning, to give an opportunity to local musicians to play here, especially in the case of the younger generation, those of them who are just starting out and deserve a shot. Also, we have an agreement with the Ministry of Culture to prepare shows together. We’re already working on things for Christmas, very good things, very cultural things.

I’m also tinkering with some things to see if we can set up some more popular acts in the Amphitheatre, see how we can set things up to show Dominican music more, not just for Dominicans, but for tourists as well. We have to remember we’re a touristic entity and, for instance, imagine the number of tourists that come to the La Romana – Bayahibe area, or also Bávaro, who would want to see a concert with merengue, bachata, you know, things from here, and don’t get the chance to. That’s something we’re working on, and we also have several options for the end of the year and the beginning of the next, we have a few international artists that might come, so we’ll see how that goes.

@cdcliving: What’s your favorite thing to do here in Casa de Campo, when you’re not working?

I really like to walk around Altos de Chavón, I really do… But that almost sounds like I’m lying, I shouldn’t say Chavón, I should say something else!

@cdcliving: Alright, last question. Which is your favorite restaurant in Casa de Campo?