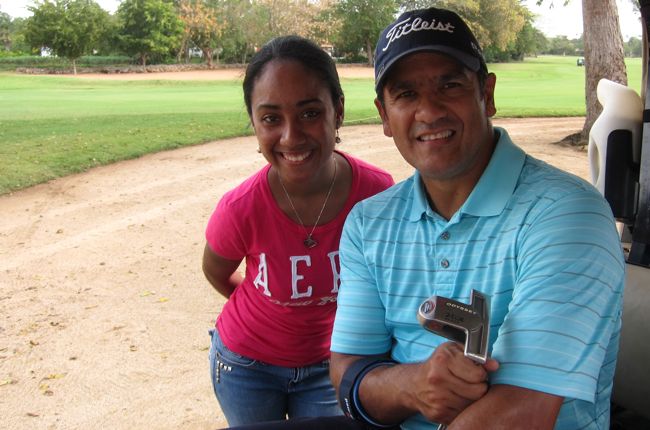 After enjoying two evenings of numerous events, including the opening of the new Fan Cave in the Marina Casa de Campo, a welcome dinner hosted at Roberto Weill’s Casa de Campo villa, and a dinner hosted by the honorary chairman, Alfy Fanjul in Casa Grande, under a bright sun, the tournament “Los Inmortales” started at  8am on an individual stroke format, where each group of four players included one baseball luminary.

Eddy Herrera on the Teeth of the Dog, Casa de Campo

And whilst, while Rebecca and I (Paola) were taking photos of the different teams playing in the “Los Inmortales” golf tournament, we were surprised to encounter a rather famous face. I have to admit that it wasn’t until Rebecca finished taking the photos of the four golf players (one latin baseball luminary Tony Oliva) when I recognized a familiar face under a blue cap and realized that this golf foursome also included one of the Dominican Republic’s best merengue singers; Eddy Herrera!

And while I was still surprised they were already walking away to their golf carts.. so trying to avoid delaying them in their game, I quickly jumped in with one tiny question for Eddy Herrera:

CCL: Can you tell us about your experience so far, playing golf in Casa de Campo?

Eddy Herrera: It’s been a marvelous experience, everything that has to do with golf tournaments is simply wonderful! And in my case, being a public figure, or an artist, it is a privilege and an honor to be invited to this event, especially when we have so many talented and famous latin baseball players here. And about these wonderful golf courses in Casa de Campo, the Teeth of the Dog, Dye Fore.. ah!! what can I say!

Thrilled as he was to be playing at the Teeth of the Dog, along with his teamates, who were quite entertained by this “improvised mini-interview”, Eddy Herrera headed to his golf cart, (where later Rebecca kindly took this article’s main photo) to continue enjoying golf in Casa de Campo.

Eddy Herrera enjoying golf at the “Teeth of the Dog”

Later on that same day, the most awaited event of the “Salon de la Fama” finally arrived; the “3rd Exaltation Ceremony of the Latino Baseball Hall of Fame” where 8 luminaries were recognized for their baseball excellent carreers at the Altos de Chavon amphitheatre.

And to end up this extraordinary event, Eddy Herrera, being the invited artist, came out on stage at 12am to perform many of his hits and contageous merengue rythms to which many members of La Romana and Casa de Campo communities danced to, including some big fans who at the end were chosen to go on stage!

To see photos and read more about the different activities held during the Latino Baseball Hall of Fame event, click on the following links: