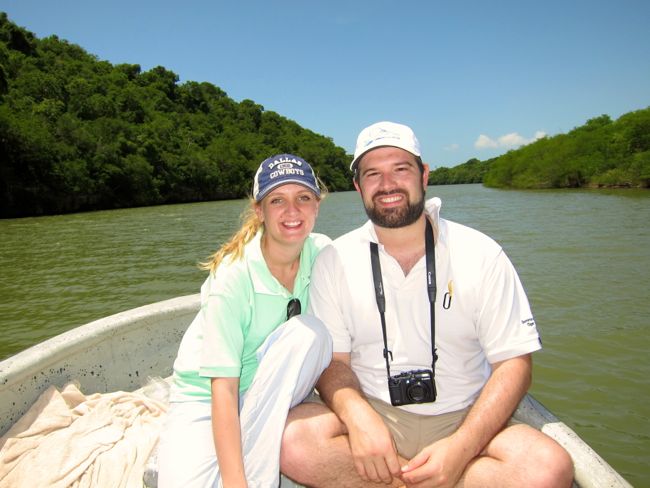 Having lived in Casa de Campo for 5 years (yes really!) it is a wonderful surprise to discover something new (and awesome) TO DO! When researching a feature article “The magnificent río Chavón” published in TODO Casa de Campo #3, I was thrilled to discover that you can actually take a speed boat up the river from Minitas Beach!

And so on a beautifully sunny day, Philip Silvestri and I, accompanied by two members of our Silgon Inc. team – Paola Marte, journalist and project manager and Edward Mercedes, web programmer – we sacrificed ourselves in the name of research and had a wonderful experience messing about on the river!

The excursion began from Minitas Beach. We all hopped into the speedboat (the one the use for the banana boat rides) and enjoyed a wonderful view of the beach from the ocean as we left it behind us.

A gorgeous view of Minitas Beach from the speedboat

On our way around to the Chavón river, we followed the coast of Casa de Campo, affording us a wonderful opportunity to admire the ocean front villas in the Punta Minitas neighborhood and then past the entrance to the Marina Casa de Campo until we arrived at the Chavón river.

On oceanfront property in the Punta Minitas, Casa de Campo

Heading up the river, you first pass a sparse area of mangroves teeming with pelicans, with a fabulous view of some Casa de Campo villas perched above the river. As we continued to meander upstream our guide/captain pointed out interesting wildlife and plants – such as 2 Rhinoceros Iguanas sunning themselves on rocky outcrops.

Altos de Chavón perched on the cliff overlooking the river

A highlight is undoubtedly the view of Altos de Chavón perched high above the river, the site of this Mediterranean village replica sat atop the cliff’s edge is most beautiful and awe-inspiring – and shines a whole new light onto the ingenuity of the village’s design and construction. We managed to convince our guides to let us stop and climb out onto the grassy riverbank so we could take some great photos of Chavón – we don’t know if that’s really part of the tour… but there’s no harm in asking if you want to do that too!

Edward, Rebecca (me), Philip and Paola

The Chavón river is a natural and abundant habitat for native Dominican wildlife, making it a wonderful place to explore and experience the natural beauty and diversity of the Dominican Republic.

Just before the Río Chavón flows out into the Caribbean sea, a sparse area of mangroves lines the rivershore. Here, flocks of Caribbean Brown Pelicans can be seen perched in the trees, occasionally circling around before diving at great speeds into the water to snap up fish. Despite being the smallest species of Pelican, Brown Pelicans, have a wingspan of up to 8ft and are actually more grey in color, with white necks and heads, often with a pale yellow crown. Sharing this habitat with the Pelicans are schools of fish, who can be seen sporadically jumping above the surface. Meanwhile, a pod of dolphins is known to spend the night near the river mouth journeying everyday to Saona Island to feed.

Brown Pelicans on the Chavón river

Amongst the many endemic creatures that live in this wilderness, are the magnificent Rhinoceros Iguanas. A protected species, these Iguanas are primarily found on the Island of Hispaniola and, as they are hunted for human consumption, are in imminent danger of extinction. These beautiful and inoffensive creatures grow up to 4.5ft long and can weigh as much as 20lbs. Their most distinguishing features are a crest of pointed horned scales stretching from the nape of their neck to the tip of their tail and a pseudo-horn on their snout – a feature which earns them the name, Rhinoceros.

Rhinoceros Iguana seen on from the Chavón river

Also inhabiting the area are Hispaniolan Hutias (pictured left – photo by Jorge Luis Brocca), the Dominican Republic’s only surviving native rodent, a nocturnal animal that grows up to a 1.5ft and resembles a large guinea pig, as well as three of the island’s non-venomous snakes; the Boa de la Hispaniola, the Lesser Sharp-nosed Treesnake and the Hispaniolan Common Blindsnake. The shrew-like Hispaniolan Solenodon, the Dominican Republic’s only venomous animal, which has a long snout and specialised teeth, is also thought to live along the river shore.

In addition to the Brown Pelicans found at the river’s estuary, the Chavón river and its surrounding habitat boast an impressive and varied bird population. The most abundant species in the area are the Turkey Vultures, who live in the cliffs towering above the river – particularly in the area surrounding Altos de Chavón. A large bird, an adult can have a wingspan of up to 6ft and with their bulky black bodies and small red heads, they are easily recognizable – and are often spotted circling above the cliff right in front of the Chavón Plaza. Also seen year round in the area are Red-tailed Hawks, Herons, Snow Egret and Cattle Egrets, whilst Hispaniolan Woodpeckers nest in the area between June and August.

This is a fabulous way to explore the Chavón river and something we very much recommend. The boat sticks to a slow speed and so the tour is suitable for the whole family.

Speedboat ride up the Chavón river

Capacity: Up to 7 people