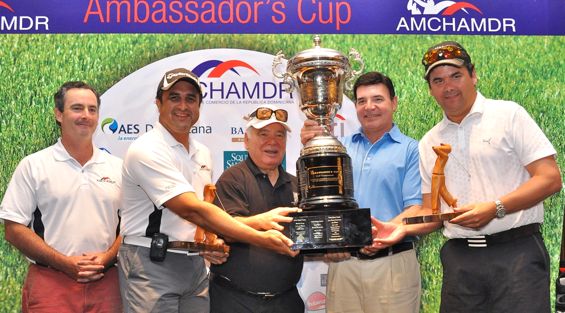 Last Saturday the 14th of May, the American Chamber for Commerce in the Dominican Republic (AMCHAMDR) celebrated it’s 12th annual Ambassador’s Cup Golf Tournament on Casa de Campo’s stunning Pete Dye designed Golf Course; the Teeth of the Dog, which was followed by a lunchtime celebration and prize-giving. Here we bring you photos from the lunch and prize-giving as well as the tournament results.

For the 120 golfers of the annual AMCHAMDR ‘Ambassadors Cup’ tournament, the day began bright and early with an 8.30am tee off on the Teeth of the Dog (click here for photos on the course) which was followed by lunch at Casa de Campo’s Flamboyant conference centre, for the players and a few special guests. The lunch catered by Casa de Campo was of course delicious with a nice variety of meats, pastas and salad as well as a tempted selection of deserts – the perfect selection to satisfy all the hungry golfers.

Immediately after lunch the prize-giving and raffle began, which was impressively long – there were so many prizes (and good prizes) in the raffle that, the golfers who didn’t win a prize must have felt very unlucky! During the ceremony, Julio V Brache, president of AMCHAMDR and Honorary United States Ambassador of the Dominican Republic, Raul H. Yzaguirre took to the stage to thank the participants and sponsors for the participation in the event which raised money to benefit community development projects located in different parts of the country, as well as for strengthening the initiatives of the education program.

Click here for photos of the golf on the Teeth of the Dog.

In the end, the overall winners, Leo Perez and José Tomas Contreras were awarded the grand trophy and the other category winners were given their trophies, the tournament prize-winners were as follows:

Here are my photos of the prize-giving – they are mostly just photos of the raffle, I sadly had to leave before the end as my own event, the ‘Bazaar Primavera’ was happening in Altos de Chavón at the same time!

About AMCHAMDR
The American Chamber of Commerce of the Dominican Republic is a non-profit organization that seeks to strengthen the development of trade ties between both countries through the strengthening of free enterprise, investment promotion, community service, improving government relations and international and service to its members. Founded on November 8, 1923 it has a membership of more than 2,700 businesses and professional firms in Santo Domingo and nine provincial offices.