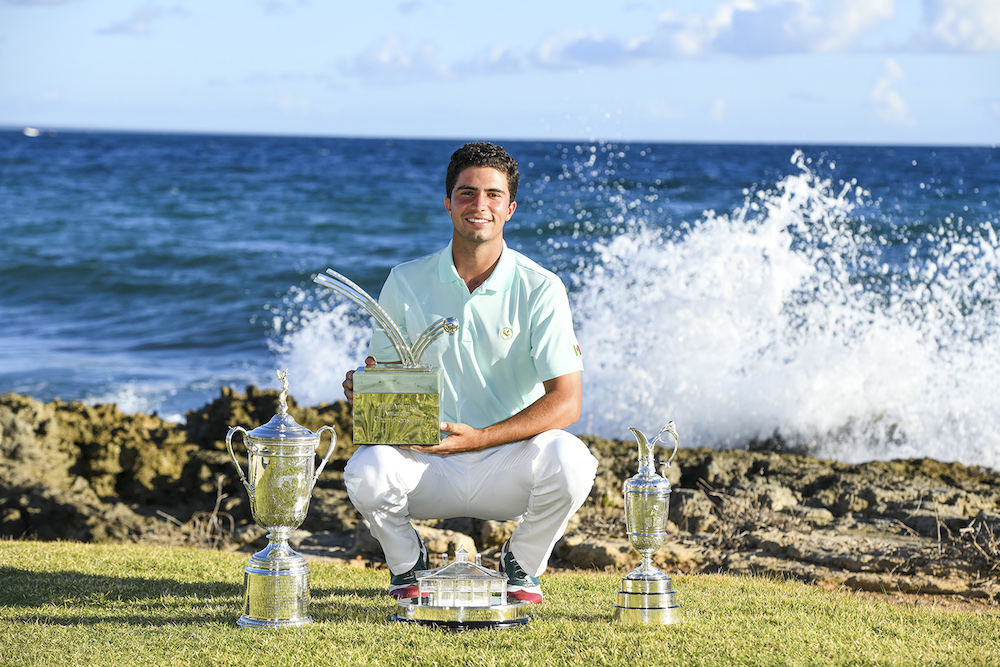 Mexico’s Alvaro Ortiz clinched the Latin America Amateur Championship (LAAC) in style today after a keenly contested duel with Luis Gagne of Costa Rica at the renowned Teeth of the Dog course at Casa de Campo. The two-time runner-up and one-time joint third-place finisher finally secured his dream victory with a 14-under-par total of 274, two shots clear of Gagne, who matched his closing round of 6-under-par 66.

Next April, Ortiz will become only the second Mexican amateur to compete in the Masters Tournament (after Juan Antonio Estrada who played from 1962-64) and has secured places in the final stages of qualifying for The 148th Open at Royal Portrush and the 119th U.S. Open at Pebble Beach. He is also exempt for The Amateur Championship, the U.S. Amateur Championship and any other USGA amateur event for which he is eligible.

The 23-year-old from Guadalajara got off to a strong start with a birdie at the opening hole and gained another at the 5th, but a costly bogey at the par-four 8th left him two behind a surging Gagne. Ortiz, whose older brother Carlos plays on the PGA Tour, kept his cool, however, and overturned the deficit with a dramatic eagle three at the 12th and a birdie three at the next.

The 54-hole leader almost dramatically holed his approach shot at the 295-yard, par-four 17th and tapped in for another birdie to move two clear of the Costa Rican before closing out a fine victory with a birdie four at the closing hole.

Ortiz was runner-up to Chile’s Joaquin Niemann at Prince of Wales Country Club in Chile last year and lost out in a playoff to another Chilean Toto Gana at Club de Golf de Panama in 2017. The University of Arkansas alumnus also finished tied for third at Pilar Golf in Argentina in 2015 and has held the lead after a round in the LAAC a record seven times.

In his debut appearance in the championship, Gagne made his move with three consecutive birdies from the 3rd hole and reached 6-under-par for the day with another at the 14th but the 21-year-old slipped up at the par four 17th with his first bogey since the 8th hole, his 17th, in the second round. The LSU senior finished with a birdie four at the last but it was not enough to catch Ortiz.

Luis Fernando Barco was bidding to become the first Peruvian to win the LAAC, but the 2018 Peruvian and Mexican Amateur champion’s 2-under round of 70 left him 9-under for the championship and in third position, five shots adrift of Ortiz.

Gana made a final round charge with a 6-under-par round of 66 to finish 8-under for the championship. The junior at Division II Lynn University in Florida produced six birdies in a blemish-free final round to finish fourth.

Brazil’s Andrey Borges Xavier also made a run with a 6-under round of 66 to move to 7-under overall. His compatriot Fred Biondi finished a shot further back alongside Venezuela’s Jorge Garcia.

In this way, a successful edition of the LAAC ends on its return to Casa de Campo, a venue that is definitely up to this prestigious championship that revolutionized amateur golf in Latin America. The next stop will be at El Camaleón de Mayakoba in Riviera Maya, Mexico, from January 16 to 19, 2020. For the second year in a row, the defending champion will not be present because once he finishes his participation in The Masters, Álvaro Ortiz will jump to professionalism Without a doubt, there is no better way to finish a great career as an amateur.