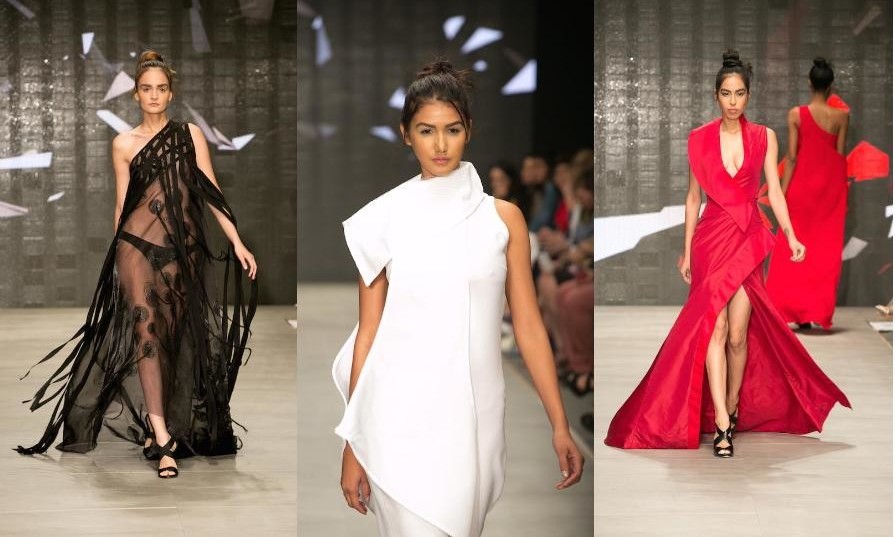 Dominicana Moda 2015 was pretty EPIC as it concluded Saturday night with Jean Paul Gautier presenting a fabulous collection headlined by Miss France, Camille Cerf, and then walking down the runway himself to the tune of Juan Luis Guerra’s “La Llave de Mi Corazón” to close the show.

On the same runway and less than 48 hours before, the 31st graduating class of the Chavón School of Design presented its collection, Deconstruction, which got raving reviews from the crowd and fashionistas alike.

A group from Casa de Campo headed over to Santo Domingo in two busses earlier in the day, organized by the Hogar del Niño. The groups first stop was at Blue Mall where the ladies (and a few gentlemen) met with several community members who were already in Santo Domingo to eat lunch at SBG in celebration of Malele Strofer’s birthday! Happy Birthday again Malele!!!

After lunch, AND CAKE, the group hustled over to the Embajador Hotel where Dominicana Moda was being held. The Garden Tent was the setting for the show and upon entering, some of the ladies met up with Ambassador James Brewster and his husband Bob J. Satawake who were accompanied by Dominique Bluhdorn, President of the Altos de Chavón Cultural Center, and were sitting in the front row of the runway.

After mingling on the runway for a few minutes, the lights dimmed and the full house gallery took their seats. Videos of Hogar del Niño and Save the Children were projected on the screens so that guests understood the causes they were supporting with their attendance to the show.

23 graduating students each presented a single piece as part of the collection inspired by the post modernist movement. Through fashion, this movement pretends to question the meaning and function of the pieces of clothing in order to break away from the norm and innovate. The pieces tend to look a bit surreal combining textures, colors and proportions. The deconstruction of the pieces is part of a creative vision and philosophy.

The Altos de Chavón School of Design’s Fashion students put forth a collection that logically and intelligently deconstructs traditional clothing which at times seemed like they were walking down the runway portraying some sort of “controlled chaos”. The collection was divided in two categories: Urban Chic and Cocktail/Evening Wear. The former had predominantly white and black collection items with cotton, linen and other synthetic fibers. The later integrated a burst of color using red, metallic colors and nudes. All in all, the collection was a complete success, having caught the attention of a couple of Casa de Campo ladies who decided to acquire their collection items right as they headed down from the runway.

Take a look at the whole collection in 15 seconds!