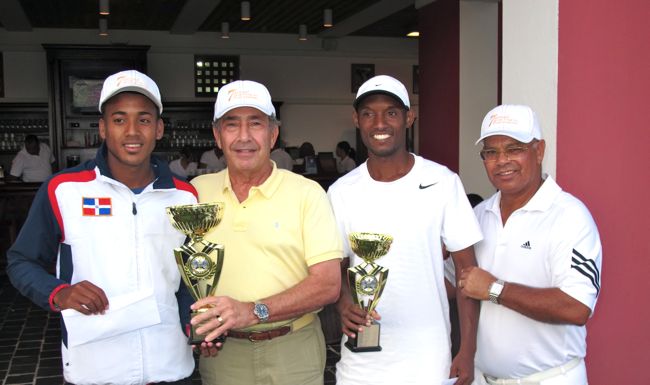 Alfonso Paniagua has recently been announced as the honorary chairman of this years edition of the McDaniel Teaching Pros Tennis Tournament.

As a constant supporter of the cause that dedicates itself to putting the resorts ball boys through school, Alfonso Paniagua was a natural choice for this years honorary chairman.

“He’s been a loyal supporter f the tennis programs here for more than 40 years. He’s a fair guy, he’s always done what is best for the players and ball boys,” Rick McDaniel, founder of the tournament shared with Casa de Campo Living.

At the sponsor’s cocktail, to be celebrated on Friday March 14th, Alfonso Paniagua will be presented with a plague in honor of his position of honorary chairman. During this gathering, a plague will also be presented to Patricia Moscatello, widow of our dear friend Harry Moscatello, an enthusiastic and dedicated member of the tournament committee, as well as of our Casa de Campo community.

“It will be dedicated to the memory of Harry for his years of service in support of the cause. He was a good guy,” Rick McDaniel commented to Casa de Campo Living.

The tournament, played annually between the teaching professionals and ball boys of the La Romana Country Club and the La Terraza Tennis Club in Casa de Campo, is the principle fundraising effort for the Ball Boy’s Scholarship Foundation. So far the organizing comittee, led by Rick McDaniel, founder of the cause has raised more than US$15,000, but having raised a whopping US$46,500 last year hopes are to at least triple this figure.

Every year, funds raised are destined to the Ball Boy’s Scholarship Foundation, which now funds the education for 27 ball boys and ball girls. But last year, for the first time the charity was able to award a college sponsorship to one of the graduating ball boys.

The tournament’s organizing comitee, oh which Casa de Campo Living is part, met yesterday Wednesday February 12th, during which Rick McDaniel discussed his hopes that this year enough money would be raised to provide health insurance for the 35 players who annually compete in the tournament.

How you can help

If YOU would like to help support this cause, individual sponsors are very welcome, with suggested donations between US$150 up to US$5,000, while there is also a “Corporate Sponsorship” option with SILGON, Marketing, Web Development & Publishing Services as the lead sponsor. See below for the different sponsorship options.

For individual and corporate sponsoring options please contact us at:
(809) 523-2045, [email protected]

Sunday March 16th, 4pm – Finals at La Romana Country Club followed by the Awards Ceremony for all the players