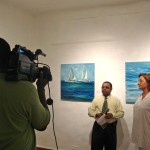 On a pleasant Thursday evening, on the 24th of September, the Altos de Chavon art gallery opened a new exhibit ‘Ainotna,’ this opening was made extra special by the presence of a very exciting guest – Agustin of Agustin en TV.

Agustin filmed a short interview with Ainotna on her exhibit as well shots of the exhibit itself. The interview was filmed for a TV show called ‘Matutina de Hoy’ which is aired on channel 17.

The actual interview, which you can view below is very interesting; Ainotna, the artist being interviewed tries to explain her art, while Agustin seems preoccupied with the number of naked bodies featured in her paintings. The filming is excellent and you’ll see some great scenes of the opening night itself as well as the paintings, and a sneak peek at some of those naked bodies…

It’s a classic piece of filming, see for yourself below:

Agustin is a La Romana local and focuses much of his filming expertise on the La Romana area and is especially avid about promoting the arts. 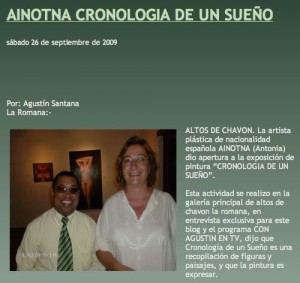 Agustin also has a blog: http://conagustindigital.blogspot.com

To the left, you can see a screen shot taken from Agustin’s blog, he has an in-depth description of the gallery, the artist (Ainotna) and some nice photos of the event. His most recent La Romana related articles include ‘Bomberos La Romana; Quiero Ser Bombero’ and ‘El Romanense: Esta en el pais pelotero ambiorix burgos,’ both of which are rather interesting.

You can see more of Agustin’s filming experiences on youtube, just search for ‘Agustin en TV.’