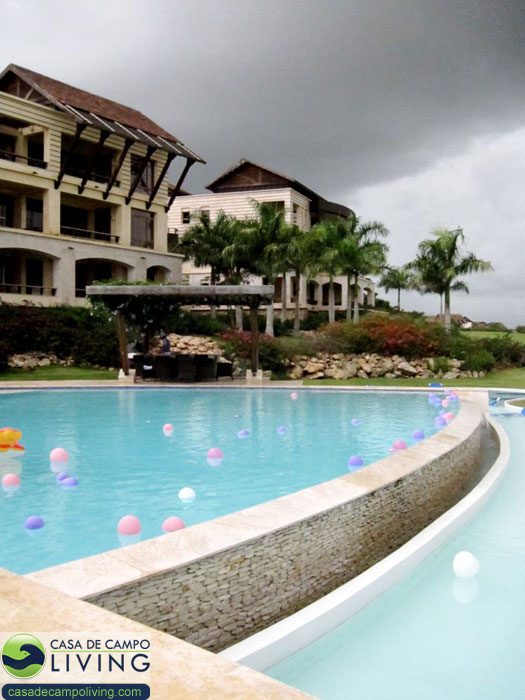 It’s not quite what you may be thinking! Last sSaturday, the latest full-time member of our community, Alexia Bermello celebrated her birthday party up in Casa de Campo’s Los Altos project. It was a memorable event – one that the hundred or so guests are not likely to forget!

Heading up to the party at 3.30pm, I was a concerned I might be just a little bit late – all guests had been informed to arrive 2pm ‘Dominican time.’ Happily I was among the first to arrive – you have to love the laid back and casual nature of these events! In fact, my timing could not have been more perfect, as the birthday girl was just on her way down to kick-off the festivities. Rushing is so overrated.

The setting was beautiful and a welcome change, as ashamedly this was my first time at one of the pools at Los Altos. The view is breathtaking, with the Dye Fore golf course sitting between you and the Chavon river.

There was a tent with all the food and drinks, a DJ ready to get the party going and a BBQ being readied for the burgers it was about to cook. Balloons were all around, setting the festive tone as the music started to rock. The champagne was cold, the Jacuzzi was hot and the pool, comfortably in between. The scene was set for one heck of a party! As more and more people arrived, the music got louder and just as the party was in full swing a storm arrived At 5pm it began to rain. Hard. The wind began to pick-up and many of us where looking for Dorothy over the horizon, while the braver ones among us held on to the tent to stop it from flying away.

In retrospect it was really rather comical, although at the time, it was a little frightening! Nevertheless, with the wind huffing and puffing, the tent held up and the food, drinks and the all-important birthday cake were all transfered indoors – closely followed by over 100 dripping wet party guests! The party started up again in Alexia’s stunning, pristine and primarily white Los Altos apartment. An invasion had begun!

Luckily the apartments in Los Altos have some very large and incredibly beautiful balconies which were easily able to accomodate many of the guests who did not feel they had gotten wet enough. Those who were ready to dry-off a bit were given towels. A lot of towels. In fact, I don’t know where those towels kept appearing from, but I suspect that there might be a towel breeding colony nearby. Nevertheless – the towels just kept on coming, as did the rain and the rain soaked guests. Fortunately the fun would follow as well!

The birthday girl, as always, had a smile on her face and did not flinch for a moment, despite the unfortunate weather. A gracious host as ever, she embraced the impromptu change in location and let the festivities continue. The important thing was to be surrounded by friends and family.

Alexia, I think I speak on everyone’s behalf in thanking you for letting us share with you such a wonderful, memorable, wet and wild birthday celebration!