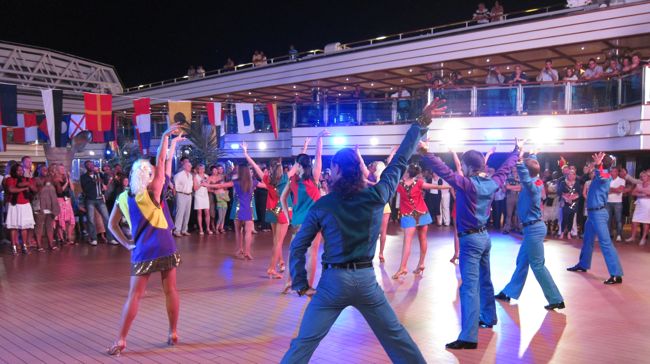 Recently, Philip and I returned to the Costa Luminosa for the 3rd time since it’s arrival in December – this time determined to really explore the ship and so here we bring you our account of our adventure around the Costa Luminosa. We enjoyed much more than just dinner and drinks…….

Visits aboard the Costa Luminosa

Tours aboard the Costa Luminosa cruise ship are currently available for Casa de Campo villa owners, hotel guests and residents, over 18 years of age, every Monday until the end of April.

Cost: US$60 per person, includes a 4 course meal, wine and transport (although if you would prefer you can drive yourself)

Getting there
Having pre-registered and booked with the Casa de Campo villa owners club the week before (details above), we were able to drive ourselves to the Costa Luminosa – a fact that meant we could arrive in our own time. The Costa Luminosa is less than a 5 minute drive from the entrance of Casa de Campo; from the gate turn right towards La Romana then on the main road before the first bridge turn left (over the railway track) and then turn immeadiatley right – follow the road along and you’ll find the ship! When you arrive you go into the gated car park and tell the security you’re visiting from Casa de Campo and you’ll be given instructions to get in.

Getting on the boat
Getting on the boat you go through security (where you have to hand in your passport – so don’t forget it) and from there you will be met by a representative from the Costa Luminosa who will take you to “check in” – when you register your credit card to get your “Costa card”, which you the use to pay for any drinks, gifts etc.

Then let the fun begin……

At this point you’ll be given a map and you can chose to wander around the boat or be escorted straight up to the restaurant and leave the exploring to later. We left the exploration until after dinner (and a few glasses of wine), so here goes our adventure…..

Dinner in the Costa Luminosa Restaurant

The 4 course dinner (including wine) in the Costa Luminosa is included in your visit to the ship (USD$60) – so here we enjoyed indulging on everything we were offered….even finishing the meal which a cheeky glass of prosecco!

We recently wrote a “review” on dinner at the Cosat Luminosa restaurant, so if you’d like to know more about the food options – click here!

The mushroom lasagne was our favorite!

From dinner you are free to wander as you please , if you want to find anything particular you can use your map (which you should be given at check in), otherwise we recommend you just wander around – the ship is large but it’s not so large that you’ll get very lost!

A few places we wandered to…..

You can enter the pool party from the same deck as the restaurant (#10), just walk out of the restaurant, go around past the stairs and through some big heavy grey doors and then you’re in the upper pool area. By the time we arrived, this area was pumping and packed with people watching an “ice sculpting demonstration” – which doesn’t sound very interesting but was actually fun to watch as 2 giant ice sculptures were created in less than 5 minutes, pretty cool stuff!

Ice sculpting display at the pool party aboard the Costa Luminosa

Next the party continued with “line dancing” – latino style, meaning that yes everyone was dancing in lines, but rather than western music, the music was salsa and merengue!

Line dancing aboard the Costa Luminosa!

And just as we were about to head off….the STARLIGHT DANCERS appeared for a mini-show! This was not broadway but with cheesy fun music and equally cheesy dance moves – the show was certainly entertaining!

After the show, the latino line dancing continued but rather than join in – we decided to keep on wandering…..

A romantic stroll around the roof deck

From the pool party we climbed up to deck 11 and ventured out onto the roof deck, where we took a romantic starlight stroll.

There is not much to see up there, but we found the area to be essentially deserted and we enjoyed the view of La Romana. We also had fun playing with the telescopes…although that was pretty silly – in the dark you can’t really see anything!

Before leaving we decided to have a nosey around decks 2 and 3 – where some more “chilled” entertainment areas can be found. We passed through the casino, the nightclub, the shopping several bar areas and another dancing area – which catered for a slightly older crowd, who were dancing ballroom.

The Vega Casino on the Costa Luminosa

And that was the end of our adventure!If you’ve not yet visited the Costa Luminosa, we really recommend you give it a try!